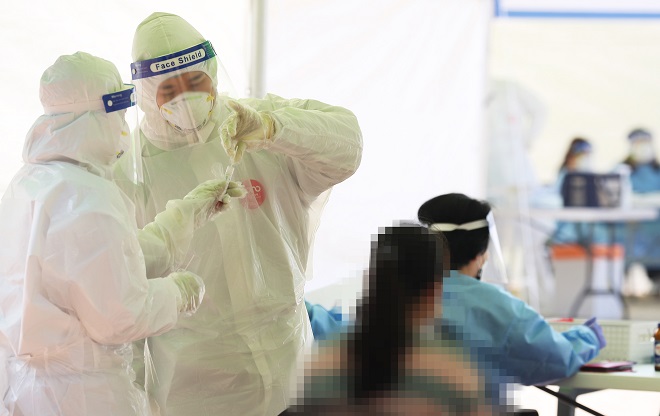 Medical workers carry out new coronavirus tests on visitors at a makeshift clinic in Siheung, southwest of Seoul, on Oct. 20, 2020. (Yonhap)

The country added 58 more COVID-19 cases, including 41 domestic infections, raising the total caseload to 25,333, according to the Korea Disease Control and Prevention Agency (KDCA).

The figure marked a drop from 76 daily cases reported Monday and 91 from Sunday. It was also the lowest since 47 added on Friday.

Health authorities say that despite the overall slowdown in the new cases, sporadic cluster infections are still lingering throughout the nation, with additional infections being reported from various places including nursing homes and supermarkets.

South Korea has been operating the lowest Level 1 social distancing scheme since Oct. 12, as the daily increase of COVID-19 patients is at a manageable level.

As South Koreans have gradually returned to their daily routines, the country also eased the attendance cap at schools, previously set at one-third at elementary and middle schools, to two-thirds for all schools.

The country, which operates a three-tier alert system, adopted the Level 2 social distancing scheme in August as cases tied to a conservative church in northern Seoul and an anti-government rally piled up.

During the period, indoor gatherings of 50 or more people were strictly prohibited, while high-risk facilities such as bars and karaoke rooms were ordered to fully shut down.

Such regulations were lifted last week on the condition that infection prevention measures are strictly followed.

“While the number of new virus cases is slowing, the country will also soon observe the aftermath of returning to the Level 1 social distancing scheme,” Kwon Joon-wook, deputy director of the Central Disease Control Headquarters, said in a press briefing.

While health authorities had been concerned that the country may face a new wave of the pandemic as millions of South Koreans traveled across the nation over the fall harvest Chuseok holiday, no significant uptick in the number of new cases was observed during the period.

Over the past two weeks, 13.7 percent of the total cases reported here had unknown infection routes. The proportion of cluster infections reached 23.3 percent, KCDA data showed. 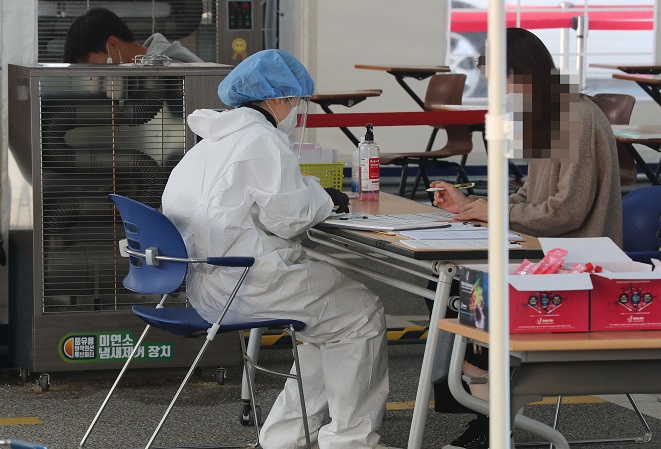 A medical worker carries out new coronavirus tests at a makeshift clinic in southern Seoul on Oct. 20, 2020. (Yonhap)

Of the newly identified local infections, 11 cases were reported in Seoul, 22 cases in Gyeonggi Province and three cases in the western port city of Incheon.

The southern port city of Busan added one more case.

New virus cases in a rehabilitation hospital in Gwangju, Gyeonggi Province, surged to 59 as of Monday, up eight from the previous day.

Infections among a group of acquaintances in southern Seoul increased by nine as of noon Tuesday, raising the total tally to 10 after the first patient was recorded last week.

A hospital in Uijeongbu, north of Seoul, added seven more patients, raising the total to 70. Another hospital from Gwangju, Gyeonggi Province, reported 63 patients as of Tuesday.

The number of cases traced to a nursing home in Busan, south of Seoul, reached 74, up one from the previous day.

The number of patients in critical or serious condition came to 71, down seven from the previous day.

Of the imported cases, Russia accounted for five patients, followed by the Philippines with three cases. Iran and the Czech Republic accounted for two cases each as well. Other countries included India, Nepal and the United States.

The total number of people released from quarantine after making full recoveries stood at 23,466, up 98 from the previous day. Around 92.6 percent of the patients reported here have been cured.

The country has supplied remdesivir, an experimental drug conventionally used to treat Ebola, to 637 patients so far.