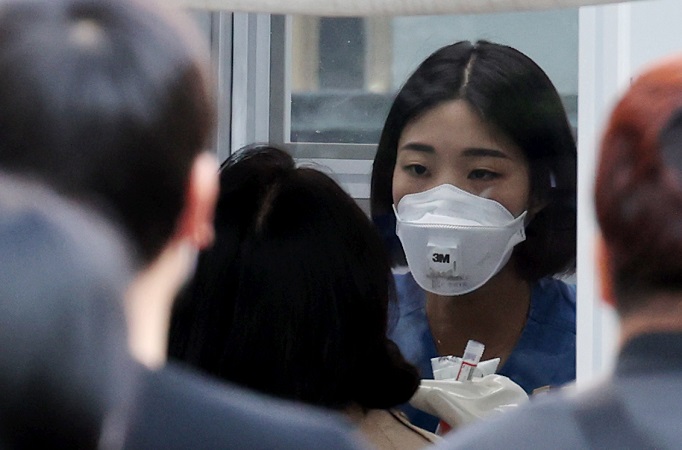 A medical worker carries out new coronavirus tests at a makeshift clinic in central Seoul on Oct. 6, 2020. (Yonhap)

SEOUL, Oct. 6 (Korea Bizwire) — South Korea’s new coronavirus cases stayed below 100 for the sixth straight day Tuesday, but the country is bracing for a possible resurgence in new infections after a long holiday, as a slew of sporadic clusters were reported.

The country added 75 more COVID-19 cases, including 66 local infections, raising the total caseload to 24,239, according to the Korea Disease Control and Prevention Agency (KDCA).

It marked a slight rise from 73 posted on Monday and 64 cases reported on Sunday.

After daily infections hit 133 on Wednesday last week, they have been in double-digit figures. The drop was in part attributed to fewer tests carried out over the five-day Chuseok holiday that ran through Sunday.

Health authorities had advised people to refrain from visiting their family members and relatives this year over the Korean equivalent of Thanksgiving.

They also allowed public transportation to sell only window seats in line with efforts to prevent the spread of the virus over Chuseok, when millions normally travel across the country.

Nevertheless, around 30 million people traveled across the nation over the holiday, down 3.1 percent from the previous year. The number of people traveling by trains and buses decreased 57 percent and 55 percent.

Health authorities are concerned that there could have been a number of asymptomatic patients who spread the virus during the Chuseok holiday.

Considering the incubation period, health authorities said there could be another wave of the pandemic soon despite the latest slowdown in the daily new cases.

“The incubation period of COVID-19 can last up to 14 days, although in most cases, it is around five to seven days,” Kwon Joon-wook, a senior health official, said during a daily briefing, pointing out the country cannot assess the post-Chuseok virus situation yet.

As the country will enjoy another three-day break from Friday to Sunday to celebrate the Korean alphabet, South Korea earlier designated a special two-week period for toughened virus curbs until the end of the holiday.

The special ant-virus scheme centers on maintaining most of the Level 2 social distancing policy nationwide, under which indoor gatherings of more than 50 people are banned.

Facilities more prone to virus infections, such as clubs and bars, will stay shuttered until the deadline in the greater Seoul area, which houses around half of the nation’s population. Those in other regions, however, were allowed to resume business starting Monday.

Health authorities are working on the details of the new social distancing guidelines that will be implemented next week. They plan to announce the scheme this week.

“We plan to take factors such as the number of new patients, along with the proportion of those with unknown transmission routes, into consideration” for the new virus preventive measures, an official from the health ministry said.

South Korea operates a three-tier social distancing system. The government has not yet issued the highest alert, which bans gatherings of 10 or more people, as it will come at a significant consequence in terms of the economy.

“If the number of new cases stays at a similar level throughout this week, we can opt for more leeway in our everyday lives while maintaining social distancing,” Kwon said.

“We will have more opportunities to seek ways to maintain safe daily lives with the virus.” 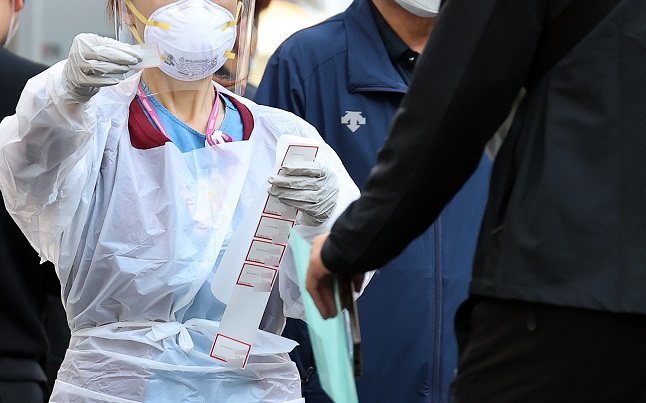 A medical worker carries out new coronavirus tests at a makeshift clinic in central Seoul on Oct. 6, 2020. (Yonhap)

Over the past two weeks, 18.2 percent of newly added patients had unknown infection routes. Although the ratio is still worrisome for the authorities, it still marked a sharp drop from 28.1 percent posted in mid-September.

According to the latest data, 26.5 percent of cases were grouped as cluster infections as well.

The country’s new virus cases had been in the triple digits for more than a month since Aug. 14, due mainly to cases tied to a church in northern Seoul and an anti-government rally. Daily infections soared to 441 on Aug. 27.

Of the newly identified local infections, 13 cases were reported in Seoul and 34 cases in Gyeonggi Province that surrounds the capital. Incheon, west of Seoul, reported four more cases.

A church in northern Seoul reported five patients as of noon Tuesday.

A hospital in the capital city also reported one additional patient, raising the total caseload to 47

A military base in Pocheon, north of Seoul, has reported 37 virus cases, up one from the previous day, sparking concerns over yet another major infection cluster. Health authorities are working to identify the infection route.

Another hospital in Uijeongbu, north of Seoul, reported 13 patients, increasing the total to 14.

Imported cases came to nine. The Philippines and Britain accounted for two cases each. There were also infections from India, Syria, Ethiopia, the Czech Republic and the United States.

So far, South Korean nationals accounted for 60 percent of the imported infections.

The fatality rate came to 1.74 percent.

The number of patients in serious or critical condition came to 105, down two from the previous day.

The total number of people released from quarantine after making full recoveries stood at 22,083, up 197 from the previous day. Some 91 percent of the patients reported here have been cured.

The country has so far administered remdesivir, an experimental drug conventionally used for Ebola, to 551 COVID-19 patients from 60 hospitals, according to the KDCA.

The agency said there has been no local usage of a treatment developed by Regeneron Pharmaceuticals, which was reportedly administered to U.S. President Donald Trump.