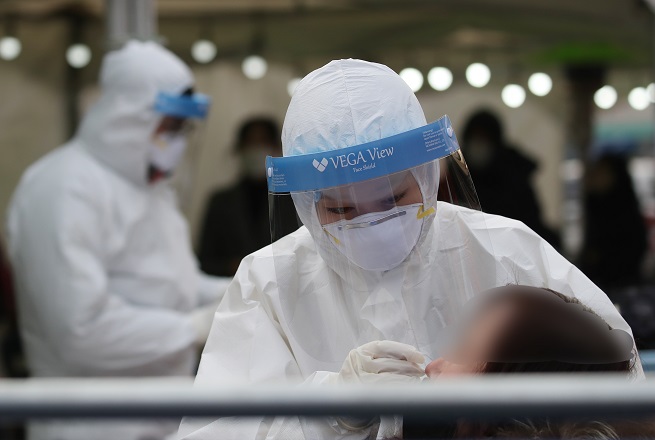 A medical worker conducts a COVID-19 test at a makeshift virus testing clinic on Dec. 22, 2020. (Yonhap)

SEOUL, Dec. 22 (Korea Bizwire) — South Korea’s daily new coronavirus cases fell below 1,000 for the second consecutive day Tuesday, with health authorities set to adopt the most stringent distancing rules so far to contain the spread of the virus.

The country added 869 more COVID-19 cases, including 824 local infections, raising the total caseload to 51,460, according to the Korea Disease Control and Prevention Agency (KDCA).

Twenty-four people died from COVID-19 in the past 24 hours, raising the death toll to 722. It was the second day in a row that the nation reported its highest daily death total. The fatality rate was 1.4 percent.

The country is expected to report more than 1,000 new daily cases on Wednesday morning, as 984 new cases were confirmed as of 9 p.m. Tuesday, according to health authorities and local governments.

The greater Seoul area accounted for 69.6 percent with 685 cases.

With one-day virus caseloads running at all-time highs last week, health authorities were considering whether to raise the country’s social distancing guidelines to Level 3, the highest in its five-tier scheme.

However, authorities said they are aiming to contain the current wave of the pandemic without raising virus curbs to Level 3 on concerns over impacts on the economy.

Instead of applying the potential lockdown measure that would deal a severe blow to millions of small merchants, health authorities deployed “targeted” virus curbs.

Gatherings of more than four people will be banned at restaurants in the greater Seoul area beginning Wednesday.

A restaurant owner and customer will face a fine of up to 3 million won (US$2,710) and up to 100,000 won, respectively, in case they are found to have violated the ban.

Across the nation, 16 ski resorts, 35 ice rinks and other winter tourist venues, including Jeongdongjin Beach in Gangwon Province that is one of the most popular beaches for watching the sunrise on New Year’s Day, were ordered to be closed from Thursday until Jan. 3.

Prime Minister Chung Sye-kyun said the new round of restrictions is aimed at containing the spread of the virus during the Christmas and New Year’s holiday seasons.

South Korean authorities have expanded anonymous testing in the greater Seoul area since Dec. 14 to try to find people who are asymptomatic and infected with COVID-19. 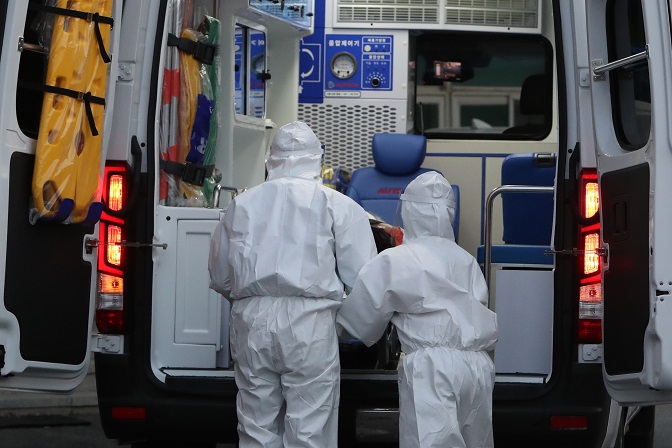 A COVID-19 patient is loaded into an ambulance at a nursing home in the southwestern city of Gwangju on Dec. 22, 2020, to be transported to a nearby hospital. Twelve residents and four workers have been diagnosed with the new coronavirus at the facility. (Yonhap)

A total of 609 infections, including 131 cases in the past 24 hours, have been confirmed through such testing so far, the KDCA said.

South Korea has been applying Level 2.5 social distancing rules in the greater Seoul area, home to half of its 51.6 million population, and Level 2 rules in the rest of the country.

Starting Wednesday, Level 2.5 rules will be applied for all religious facilities nationwide.

Of the 824 newly identified local infections announced early Tuesday, 309 cases were reported in Seoul and 193 cases in Gyeonggi Province that surrounds the capital. Incheon, west of Seoul, reported 44 more cases.

Although about 72 percent of new cases came from the greater Seoul area, all parts of the nation saw rising infections.

A nursing hospital in Seoul reported 53 additional patients, raising the caseload to 107, while a religious facility in Daegu identified 30 more cases, with the total reaching 31.

Other major cluster infections included another nursing home in Chejongju, which added 10 more patients, raising the total to 71. Another religious facility on the southern island of Jeju has reported 112 patients.

Kwon Joon-wook, deputy director of the Central Disease Control Headquarters, said in a daily briefing that COVID-19 is likely to kill more elderly people due to a surge of infections at nursing homes and hospitals.

The number of seriously or critically ill COVID-19 patients reached 281, compared with 274 from the previous day.

The total number of people released from quarantine after making full recoveries stood at 35,928, up 773 from the previous day.

The country, meanwhile, added 45 imported cases, increasing the total to 5,161. Sixteen cases came from the United States, followed by nine from Russia and five from Indonesia.

The country has carried out 3,772,432 coronavirus tests since Jan. 3. The country reported the first case on Jan. 20.