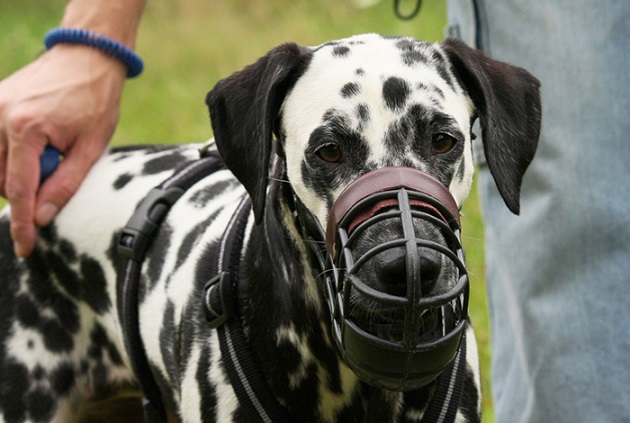 Animal rights groups and their companions protested against the idea of mandatory muzzles, saying large but mild dogs could have trouble regulating their body temperature. (image: Bodeum)

SEOUL, Apr. 15 (Korea Bizwire) — The number of people complaining in fear of large dogs is increasing due to a recent surge in reported dog bites involving large dogs.

In addition, some say that all large dogs should wear muzzles to relieve the anxiety of citizens.

On April 11, a man in his 30s were hospitalized after a dog bit his genitals at an apartment complex in the southeastern coastal city of Busan.

The owner of the dog reported to the police that his dog had never bitten anyone before as it was very mild-mannered and was just surprised by the garbage can that the victim was carrying.

The dog in question an Old English Sheepdog, which are not classified as ferocious dog as they typically do not show aggressive tendencies and attack people.

The enforced animal protection law requires that only five kinds of fierce dogs and mixed breeds of those dogs be muzzled in public. It also stipulates that owners receive compulsory education of at least three hours every year.

In the wake of a series of dog bites, the government pushed for a revision to the law that mandates large dogs taller than 40 centimeters to wear a muzzle and be kept on leashes shorter than 2 meters.

However, animal rights groups and dog owners were strongly opposed to mandating muzzles depending on the size of the dog.

In the end, the mandatory muzzle rule was only applied to five types of dogs classified as fierce dogs.

Animal rights groups and their companions protested against the idea of mandatory muzzles, saying large but mild dogs could have trouble regulating their body temperature.

Also, they argued that such a measure was unfair to other dogs as they were being treated as fierce dogs when in actuality most are typically not.

Even though statistics released by the National Fire Agency show that there 6,883 patients treated for dog bites over the past three years, and more than 2,000 people suffer from accidents every year, animal rights groups and their companions are still opposed to mandatory muzzles based on dog size.

According to the Korean Animal Welfare Association, it is not a realistic measure to make all big dogs wear muzzles because people think that all big dogs are dangerous.

If dog owners cannot control large dogs themselves, it is desirable to shorten leashes and put on a muzzle.

Furthermore, the association claims that there are dogs that are aggressive even when they are classified as mild, not fierce.