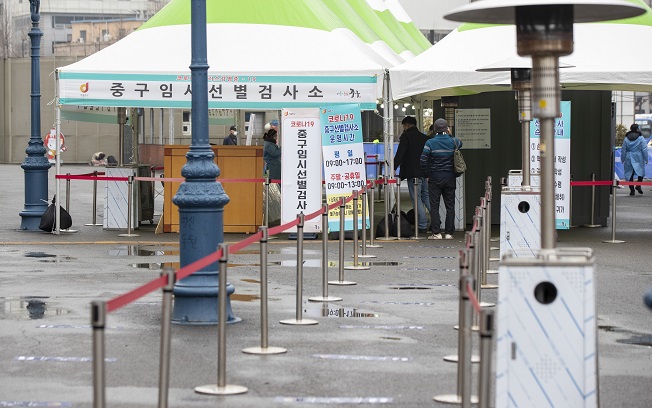 SEOUL, Jan. 22 (Korea Bizwire) – South Korea’s daily new coronavirus cases fell back below 400 Friday on the back of tougher virus curbs, but health authorities warned against complacency as they try to further slow down new infections.

The country added 346 more COVID-19 cases, including 314 domestically transmitted infections, raising the total caseload to 74,262, according to the Korea Disease Control and Prevention Agency (KDCA).

Friday’s daily caseload was sharply down from 401 cases reported the previous day.

The daily figure stayed in the 500s last week before it dropped to 389 on Monday and 386 on Tuesday. It hovered slightly above 400 on Wednesday and Thursday.

As of 9 p.m. Friday, the country added 366 more cases, up 65 from the same time Thursday, according to the health authorities and local governments.

The capital area accounted for 233 new infections, with 117 in Seoul, 105 in Gyeonggi Province and 11 in Incheon, west of the capital.

Although new infections appear to be slowing down, health authorities have been urging people to follow enhanced social distancing rules against possible upticks.

Although new infections appear to be slowing down, health authorities have been urging people to follow enhanced social distancing rules against possible upticks.

“It’s positive that we are seeing a downward trend, but given the pace of decrease, asymptomatic transmission and virus variants, we are not in a safe situation,” said Yoon Tae-ho, a senior health official said.

“We need very careful approach when it comes to easing restrictions,” Yoon said. “We have started discussion of revamping social distancing measures that can keep up the effectiveness of virus prevention as well as social acceptance.” 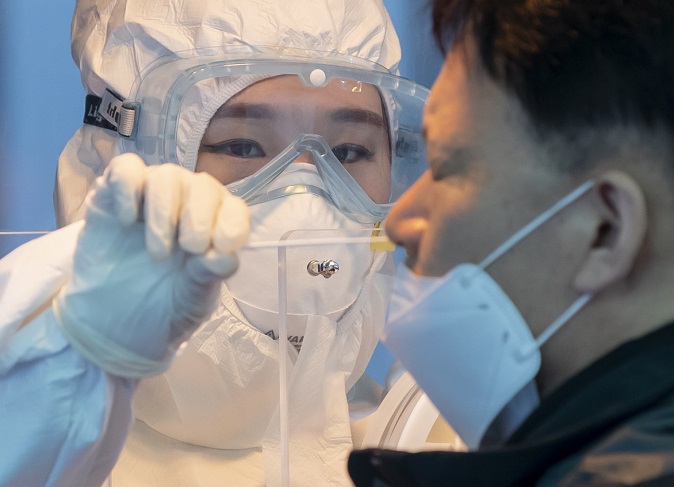 A health worker clad in a protective suit collects a sample from a citizen at a makeshift virus testing clinic in Seoul on Jan. 22, 2021. (Yonhap)

Of the 314 locally transmitted cases, Seoul accounted for 113 cases, and the surrounding Gyeonggi Province took up 102. Incheon, west of Seoul, had eight new cases. The greater Seoul area accounts for around half of the nation’s 51 million population.

Among virus clusters, a sauna facility in southern Seoul added two more cases. The number of cases tied to four hospitals in North Chungcheong Province and the city of Anseong rose by 15 to 467.

Health authorities said they will conduct special inspections on 14 correctional facilities nationwide by Feb. 14 following a massive virus outbreak at a prison. Dongbu Detention Center in southeastern Seoul has so far reported more than 1,200 cases.

There were 32 cases from overseas, raising the total number of imported cases to 6,062.

Of the newly imported cases, 17 were from the United States, followed by Egypt with five.

The country added 12 fatalities, upping the virus death toll to 1,328. The fatality rate was 1.79 percent.

The total number of people released from quarantine after making full recoveries was 61,415, up 569 from a day earlier, with 11,519 people being isolated for COVID-19 treatment, down 235 from a day ago.