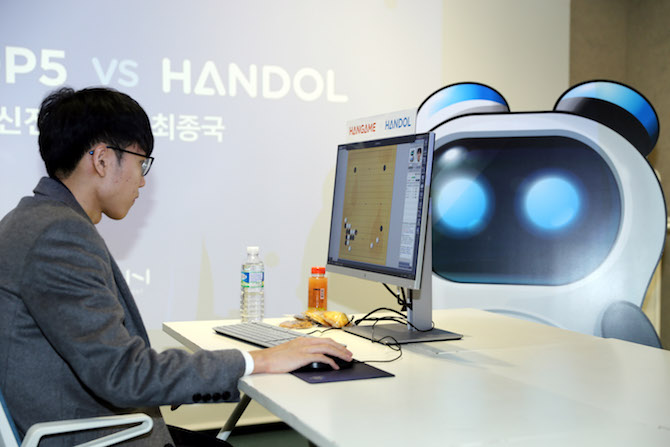 Shin Jin-seo, the world Go champion, plays a game with NHN Entertainment Corp.’s artificial intelligence program in a match held in Pangyo, south of Seoul, on Jan. 23, 2019, in this photo provided by NHN. (Image: Yonhap)

NHN’s AI player HanDol defeated Shin Jin-seo in the fifth and final match held at the company’s headquarters in Pangyo, south of Seoul, wrapping up the games against four other professionals held over the past month.

“Human counterparts can make mistakes at any time, but I felt frustrated during the game as the AI program hardly made mistakes,” Shin said after the match. “The AI’s play illustrates more creative ways than human’s. I think we need to learn more from AI.”

In a press briefing held ahead of the event, NHN said the HanDol project was inspired by the historic match between Google’s AlphaGo and Go master Lee Se-dol held in March 2016.

Google’s AI program’s 4-1 defeat of Lee was seen as a symbolic point where computers became better than humans at Go, which had been considered more challenging for computers than chess.

NHN’s AI developers said HanDol has made progress to exceed the 2016 version of AlphaGo, although they thought it still lags behind the latest version of Google’s AI.

In the early stage of development in 2018, HanDol had an 80 percent win rate against 9 dan players on its online Go game site.

In light of the successful match, the company said it will look for ways to develop AI technologies that are more accessible and easy for everyone.

“We developed HanDol under the goal of making universal AI that can be easily used by the general public,” Park Geun-han, who is in charge of the firm’s R&D center, said.

Company officials said they have been developing Go and other board games based on AI for a wide range of gamers, while looking into ways to use it in other services under its wing.

The company has an extensive business portfolio including entertainment, cloud computing, commerce and fintech, with a goal of becoming a comprehensive IT solution company.