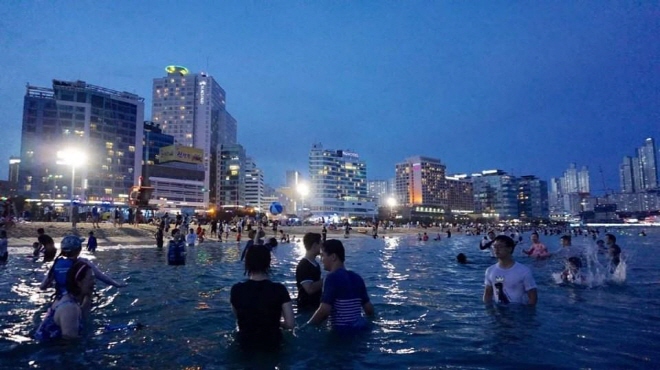 With the increase of late-night beach visitors, the programs on offer have also increased in number. (image: Haeundae District Office)

BUSAN, Aug. 8 (Korea Bizwire) — The views of summer night beaches are changing with the ‘night owls’ who enjoy relaxing by the sea at night to escape the sweltering heat during the daytime.

According to Busan’s Haeundae District, about 8,000 people have enjoyed night swimming to date since the beach started to open at night on July 26.

The figure is based on location information collected off of vacationers’ mobile phones.

More than 30,000 people visited the sandy beach, or visited beach roads and surrounding areas, even though not all the visitors enjoyed late night swimming.

With the increase of late-night beach visitors, the programs on offer have also increased in number.

A Beach Cinema will be operated three times over the summer in front of Haeundae Beach Event Square.

The cinema will offer beachgoers the opportunity to watch movies on a large screen at the white sand beach from 8 p.m. to 10:30 p.m. while sitting on air sofas or mats.

Food truck zones, where visitors fill hungry stomachs after a swim, will also be operated.

Meanwhile, the nearby Gwangalli Beach will also turn into a beach movie theater at the end of every week to attract nightlife-seeking beachgoers.

A 280-inch LED electronic board and large speakers will be ready to screen films at 8 p.m. on Saturday and Sunday.

An art market that displays and sells works created by local artists will also be operated on Saturdays and Sundays until 10 p.m.