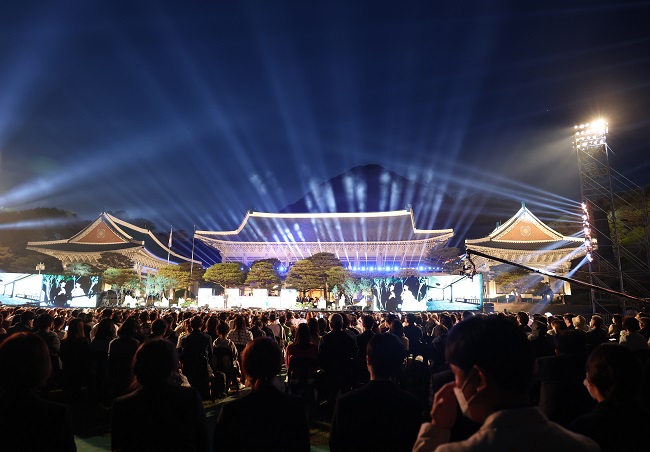 People watch a concert at Cheong Wa Dae, the former presidential office, in Seoul on May 22, 2022, organized by public broadcaster KBS. The concert was held to celebrate its opening to the public right after President Yoon Suk-yeol’s inauguration ceremony on May 10 as he moved the office to the defense ministry compound in the capital. (Yonhap)

Cheong Wa Dae, which had housed the presidential office and residence for the past 74 years, opened to the public last month after President Yoon Suk-yeol relocated the top office to the former defense ministry building in Yongsan in central Seoul.

This is the first time visitors will be allowed into Cheong Wa Dae during the nighttime since its May 10 opening. The compound has accepted visitors only until 6 p.m.

In the nocturnal tour, visitors will be able to look around the interior of the main office building, the exterior of the Sangchunjae guesthouse and the Nokjiwon garden.

Up to 50 visitors will be allowed per time slot through a draw, and applications for the draw will became available at the e-commerce website Interpark at 10 a.m. Tuesday.

The CHA said it hopes people will find a new side of Cheong Wa Dae, adding it plans to prepare more tour programs of the site.