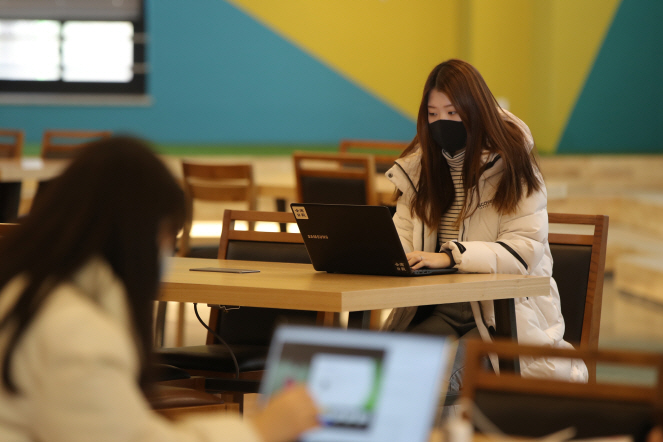 Students listen to an online lecture at a library of Gwangju University in Gwangju, 329 kilometers south of Seoul, on March 16, 2020, when the school belatedly opened its spring semester due to the new coronavirus. (Yonhap)

SEOUL, March 17 (Korea Bizwire) — South Korea’s drive to stem further spread of the new coronavirus may lose steam, but the country’s health authorities are again tightening the screw on the nationwide campaign amid slowing new infections as the next few weeks are a critical juncture to bring the COVID-19 outbreak under control.

The country recorded daily new infections of COVID-19 in the double digits for the third straight day on Tuesday, bringing the nation’s total infections to 8,320, the Korea Centers for Disease Control and Prevention (KCDC) said.

Despite an apparent slowdown, the KCDC again stressed that various anti-virus measures should be continued, such as actively practicing social distancing, over the next two or three weeks.

Social distancing refers to a series of tactics designed to keep people from gathering in large crowds to maintain distance, including working from home, canceling school and avoiding in-person meetings.

Since last month, the country has been preaching social distancing as the most viable and effective way to curb the spread of the potentially deadly illness.

Religious groups and cultural events have also been either suspended or carried out online.

“There will be more cases of mass infections such as at churches if we advise halting or slowing down social distancing practices at this moment,” KCDC Director Jeong Eun-kyeong said.

However, the country in recent days reported alarming new cluster transmissions of the new coronavirus, such as at work places and churches where people are seated very close to each other.

A total of 49 members of the River of Grace Community Church, a protestant church in Seongnam, just south of Seoul, tested positive for COVID-19.

The Seongnam church became the second-largest cluster of infections in the capital area after a Seoul call center, which has so far reported 129 infections.

The church followers were all infected after attending the same mass on March 8 despite the health authorities’ advisory to avoid worship services. 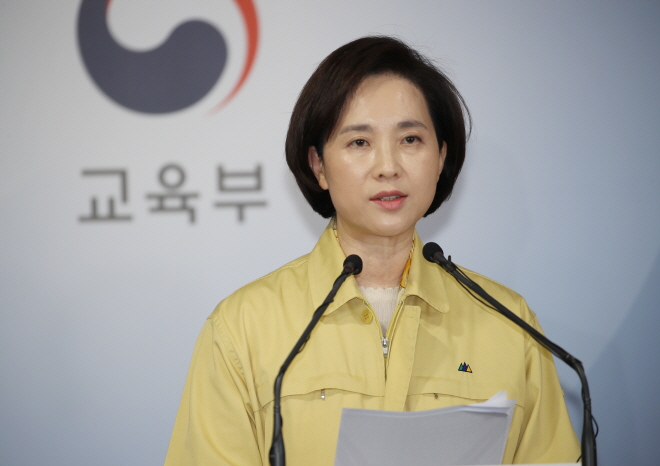 Education Minister Yoo Eun-hae speaks during a press conference at the government complex in Seoul on March 17, 2020, to announce that the government has postponed the new school year for the third time as it moves to clamp down on possible cluster infections of the new coronavirus at schools. (Yonhap)

The government, however, said it is difficult to impose a mandatory ban on church services, citing freedom of religion guaranteed by the constitution.

The KCDC emphasized that a national movement for social distancing coupled with systemic quarantine efforts are the only way to prevent the current outbreak from leading to a large-scale epidemic.

Earlier in the day, the education ministry announced it will extend school breaks by two more weeks, the latest in a series of social distancing measures.

Under the measure, the new school year will begin on April 6, five weeks later than usual, according to the education ministry.

This marks the third time the government has postponed the school year. It was first postponed by a week to March 9, then by two weeks to March 23, on concerns of children contracting COVID-19 at schools.