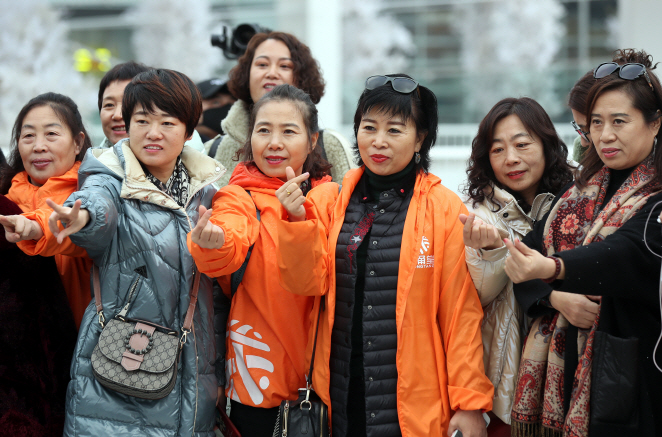 This file photo taken on Jan. 8, 2020, shows employees of China’s Yiyongtang posing in front of a shopping mall in Incheon during their incentive trip to South Korea. (Yonhap)

SEOUL, July 2 (Korea Bizwire) — The number of Chinese tourists to South Korea fell by more than 30 percent in the 2017-2020 period from three years earlier due to a bilateral diplomatic row, data showed Thursday.

The monthly average number of Chinese tourists in South Korea reached 380,000 during the three-year period starting in April 2017, down 33.1 percent compared with the three-year span beginning in February 2014, according to data by the Korea Tourism Organization (KTO).

The fall came as China — South Korea’s largest trading partner — banned group tours to South Korea in March 2017 in retaliation for the deployment of an advanced U.S. anti-missile system in South Korea.

Still, South Korea’s state-run tour agency cautioned the event does not signal that China is about to fully lift restrictions on sales of South Korean cultural and group travel goods any time soon.

Despite the decline in Chinese tourists, the total number of foreign visitors to South Korea slightly rose on the back of the Korean government’s efforts to attract tourists from other countries including Japan and Southeast Asian nations.

The number of foreign travelers reached a monthly average of 1.29 million from April 2017-December 2019, up 1.7 percent compared with the 32-month period ending in February 2017.

In the cited period, the number of Chinese tourists dipped some 30 percent.

The tally was compiled to sort out the impact of the new coronavirus outbreak on the local tourism industry.