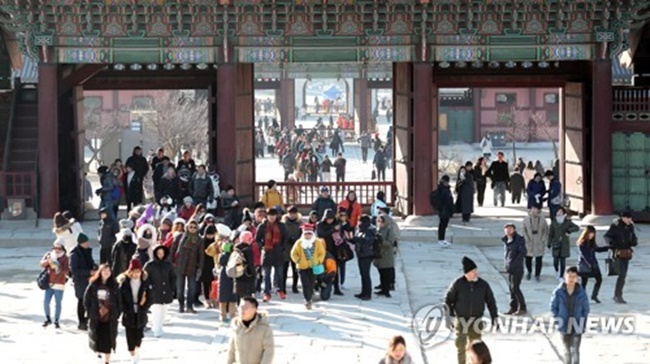 The tally of Chinese visitors came to 305,127 in January, according to the data from the Korea Tourism Organization (KTO). (Image: Yonhap)

The tally of Chinese visitors came to 305,127 in January, according to the data from the Korea Tourism Organization (KTO).

Dragged down by the weak inbound traffic from China, the total number of foreigners who visited South Korea fell 21.7 percent on-year to 956,036 from 1.22 million in the same period last year, the data showed.

After months of disputes over South Korea’s deployment of a U.S. Terminal High Altitude Area Defense (THAAD) system, Seoul and Beijing agreed to put their bilateral ties back on track in late October, but changes are yet to be felt in the Korean tourism industry.

The number of Chinese nationals who visited South Korea stood at 4.16 million in 2017, a 48.3 percent drop from the 8 million tallied the previous year.

The number of outbound South Korean nationals, meanwhile, came to 2.87 million in January, up 22.4 percent from 2.34 million a year earlier, the data showed.