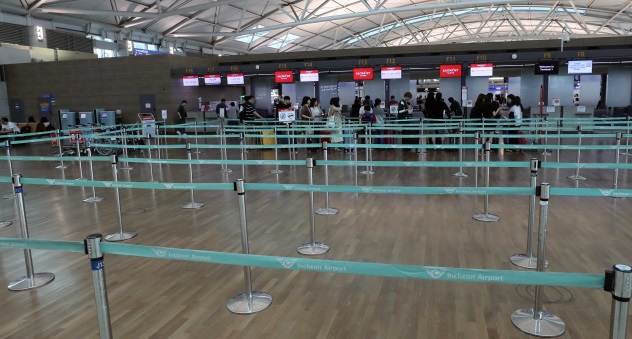 Quiet check-in counters for a flight to Japan at Incheon International Airport on Jul. 24, 2019 amid a spreading civic boycott campaign against tourism to Japan and Japanese goods. (Yonhap)

According to the Incheon International Airport Corp., 969,000 locals traveled to Japan via the airport, west of Seoul, last month, a 19.5 percent drop from the previous year.

The plunge is in stark contrast to the 3.9 percent increase in the total number of passengers using the airport in the same month.

Traffic increased to other destinations — Southeast Asia was up 15.3 percent, China rose 11.8 percent, Europe gained 10.8 percent, the Americas went up 3.8 percent and Oceania added 1.9 percent — according to the company.

In particular, the Philippines, Vietnam and Thailand enjoyed hikes of 30.1 percent, 15.8 percent and 15.3 percent, respectively, as many South Korean tourists are believed to have chosen them as alternative tourist destinations to Japan amid bilateral tensions over trade and historical issues.

Meanwhile, the airport set a new record of 237,171 for the number of daily passengers on Aug. 4.