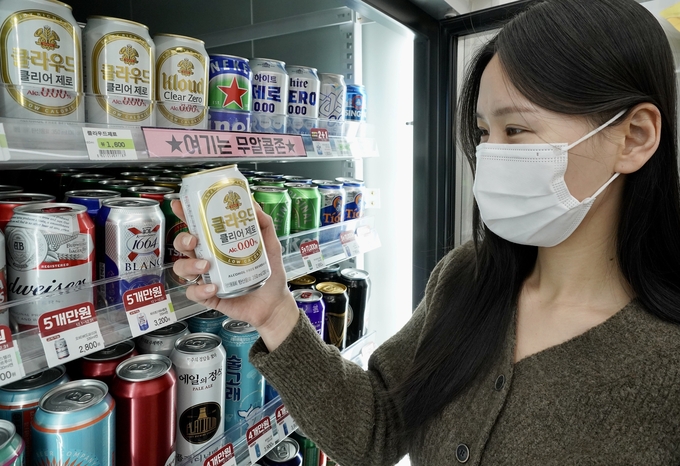 This photo provided by convenience store chain 7-Eleven shows a customer looks at a can of non-alcoholic beer at a 7-Eleven outlet.

SEOUL, Jan. 18 (Korea Bizwire) – Since the outbreak of the coronavirus, South Korea’s non-alcoholic beer market has been growing at a blistering pace thanks to an increase in the number of health-conscious consumers and the growth of the drinking-at-home culture.

Hite Jinro Co., the country’s second-largest beverage company, had been selling between 6 and 7 million cans of its non-alcoholic beer ‘Hite Zero 0.00’ since it was released in 2012.

Annual sales, however, surpassed the 10 million can mark in 2020 and more than doubled last year.

Sales of non-alcoholic beer at major convenience store chains such as GS25, CU and 7-Eleven grew by 814 percent, 460 percent and 501 percent, respectively, last year compared to a year before.

According to the Korea Customs Service, the nation’s imports of non-alcoholic beers amounted to US$7.58 million last year, a more than twofold increase from $2.93 million a year ago and a more than fivefold jump compared to the 2019 figure.

Industry experts said that the primary factor behind the expansion of the non-alcoholic beer market is the growing health-conscious trend.

In addition, non-alcoholic beer is also popular among dieters looking for beer alternatives and weak drinkers placed in a situation where they need to drink.