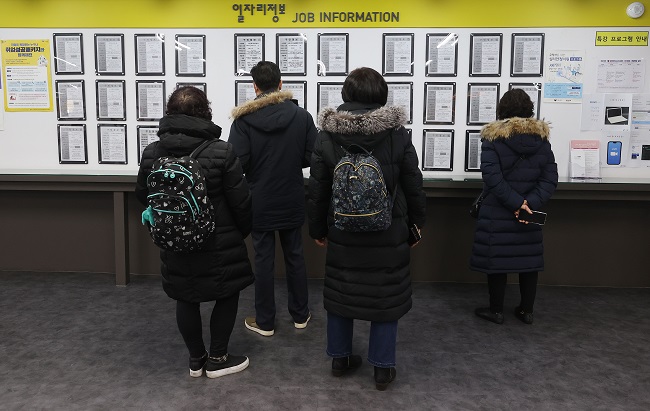 This file photo shows a billboard with job advertisements. (Yonhap)

SEOUL, Oct. 26 (Korea Bizwire) — The proportion of temporary workers in South Korea rose to over 38 percent of all salaried workers in August in the wake of the fallout from the pandemic, data showed Tuesday.

The number of non-regular workers, including part-timers and outsourced laborers, came to 8.07 million as of August, up 640,000, or 8.6 percent, from the previous year, according to the data by Statistics Korea.

Those in their 60s accounted for the largest share of 29.8 percent, followed by people in their 50s with 20.7 percent.

The increase was led by a rise in temporary workers in the antivirus field, the state-led program on short-term jobs and demand for health care services amid rapid aging, according to the government.

The average monthly salary for temporary workers was 1.77 million won (US$1,520) between June and August, up 58,000 won from a year earlier. This compared with 3.34 million won for regular workers.

South Korea reported job growth for the seventh straight month in September as the Korean economy is on a recovery track.

But job recovery remained uneven as slumps in face-to-face service segments, including accommodations and retail, continued amid the fourth wave of the pandemic.