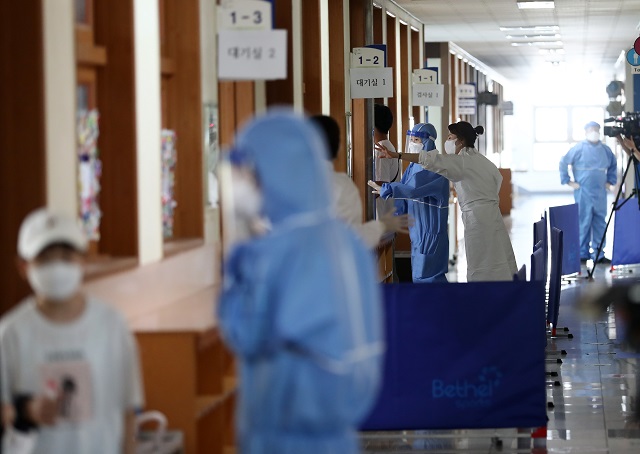 Quarantine officials work at temporary testing stations set up at an elementary school in Daejeon on July 22, 2021. (Yonhap)

SEOUL/DAEJEON, July 25 (Korea Bizwire) — South Korea will apply the second highest level of virus restrictions for non-capital areas starting this week, health officials said Sunday, in the latest step to stem the rapid spread of the virus in provincial regions at the peak of the summer holiday season.

The announcement was made during a government response meeting, presided over by President Moon Jae-in, the Central Disaster and Safety Countermeasure Headquarters (CDSCH) said.

The heightened distancing rules will take effect Tuesday, to allow time for preparation, and run through Aug. 8.

It comes days after health officials extended the toughest Level 4 distancing restriction for Seoul, the surrounding Gyeonggi Province and the western port city of Incheon, until Aug. 8.

“The biggest concern as of late is the (virus) spread in the non-capital area,” Moon said, citing the proportion of infections in non-capital areas now at over 35 percent of the total caseload.

“The extension (for the greater Seoul) was a decision made out of a desperate heart to stem the virus spread as quickly as possible and turn the situation around,” Moon said. “I am very sorry that the painful time that we have to all endure has become longer.”

The Level 3 restrictions allow private gatherings of up to four people and ban group gatherings of more than 50 people. Restaurants, cafes and karaoke bars can open till 10 p.m. 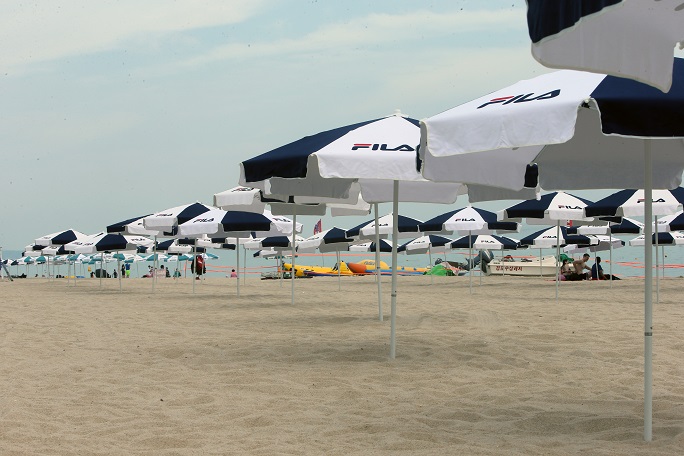 Gyeongpo Beach, one of South Korea’s most popular summer holiday destinations in the east coastal city of Gangneung, is quiet on July 24, 2021, amid the city’s toughest social distancing restrictions to curb COVID-19. (Yonhap)

The CDSCH said 81 cities and counties with fewer than 100,000 people can decide independently whether to raise their restrictions to Level 3 due to the relatively low risk they pose to virus transmission by travel.

The eastern coastal city of Gangneung, which preemptively raised its restrictions to Level 4, said it will take them down a notch to Level 3 on Tuesday.

The central city of Daejeon said it will adopt Level 4 from Tuesday until Aug. 8.

The CDSCH said parks, beaches and vacation spots in the non-capital area will prohibit drinking at night, with the exact hours to be decided at a later date.

The greater Seoul area has been under the toughest virus restrictions since early July, as the region has emerged as the epicenter of the fourth wave of the pandemic.

Earlier in the day, the central city of Daejeon said it will adopt the Level 4 distancing rules from Tuesday until Aug. 8.

The Level 4 distancing limits gatherings to two people after 6 p.m., and all private events are banned. Restaurants and cafes are allowed to open until 10 p.m., and other entertainment venues must close for the designated period.

Sunday’s announcement reinforces the curbs by putting a blanket ban on gatherings of up to four people in most of the non-capital areas.

The fourth wave of COVID-19 has pushed the nationwide daily caseload to well above 1,000 since July 7, with the figure outside of the Seoul metropolitan area having breached the 500 mark for the first time early last week.

The weekly average accounted for about 35 percent of the total across the country.

On Sunday, the country added 1,487 COVID-19 cases, including 1,422 local infections, raising the total caseload to 188,848, according to the Korea Disease Control and Prevention Agency (KDCA).