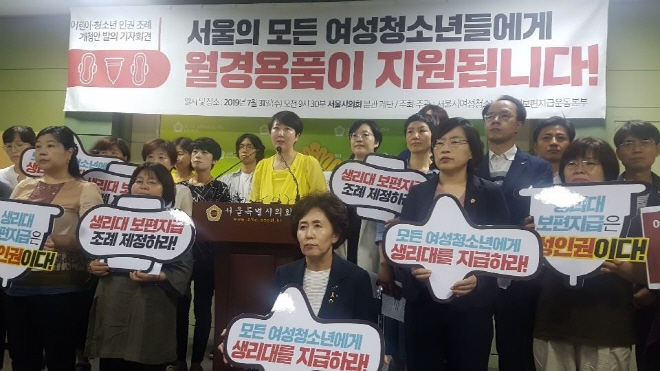 If the ordinance is passed, the city will be the second to offer female teenagers free sanitary pads after Yeoju, Gyeonggi Province. It is the first metropolitan and provincial government to do so. (Yonhap)

SEOUL, Aug. 1 (Korea Bizwire) — An ordinance has been proposed to support all female teenagers in Seoul with sanitary pads.

In the press conference, the city announced a proposed bill to provide sanitary pads to teenage girls.

The ordinance, co-sponsored by 21 lawmakers, calls for removing “low-income” from the list of sanitary goods support under Article 19, clause 6 of the current ordinance on children’s and adolescents’ human rights in Seoul so that all women aged 11 to 18 can be provided with sanitary pads.

Under the current law, only children and teenagers in low income households are eligible to receive sanitary pads.

If the ordinance is passed, the city will be the second to offer female teenagers free sanitary pads after Yeoju, Gyeonggi Province. It is the first metropolitan and provincial government to do so.

The SMG began providing sanitary pads to low-income youth in 2016, but the application rate stood at 57.8 percent as of the end of April.

“It is a matter of universal human rights to offer sanitary pads to young women who do not have economic rights,” said Lee An So-young, an official at the Korean Women’s Environmental Network.

She also added that “charity-like support,” which requires the person concerned to prove their poverty, can be embarrassing and puts a social stigma on the recipient.

Kwon’s party, which proposed the revision, believes that it would cost about 41 billion won (US$34.5 million) a year to offer sanitary pads to all female teenagers aged 11 to 18 in the city.