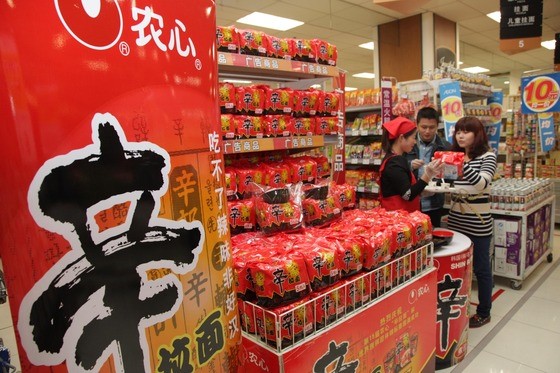 Nongshim, South Korea’s largest processed food manufacturer, announced on November 13 that the sales of its in-store online market on the 11th hit a record-high level at 300,000 yuan, or about 54 million won, exponentially up by 10 times compared with a daily sales record on average.

The online shopping mall run by Nongshim China, launched in April 2013, is the one and only online market selling Korean food items. Monthly sales this year rose 73 percent compared with the previous year. As of this October, its monthly sales exceeded 850,000 yuan while cumulative sales surpassed 10 million yuan. Monthly visitors on average stood at 450,000, up by 125 percent compared with the same period last year.

The best-selling product in China is the Nongshim Ramyun Package consisting of 11 different ramyun (or called ramen in Japanese) items including Shin Ramyun, An Sung Tang Myun, Neoguri and Kimchi Ramyun, all of which are also popular in Korea.

“Thanks to the event on the 11th, our sales volume this month is expected to hit a record. Our goal this year is to exceed 10-million-yuan sales volume. We will lead the K-food market in China by expanding the local operation,” said Ku Myung-sun, director of operations of the Chinese unit.

On the same day, Alibaba, the largest e-commerce company in China, held a huge Singles Day event, setting the highest record of about 57.11 billion yuan, equivalent to US$9.32 billion.