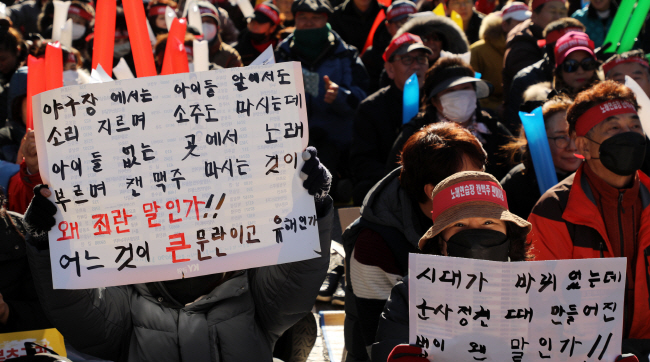 SEOUL, Nov. 26 (Korea Bizwire) — Owners of ‘noraebang’, karaoke venues where customers can rent private room to sing, took to the streets on Friday urging the government to allow them to sell beer and calling for stronger punishment against customers asking for illegal hostesses.

The Seoul Karaoke Association staged a rally in the Yeouido business district on Friday, protesting that karaoke store owners are falling victim to the country’s economic downtown.

The rally attracted more than 3,000 noraebang owners, according to the association.

The owners carried signs that said “amend law criminalizing owners for selling canned beer to adult customers,” or “singing and drinking beer is what the people want.”

“Noraebang owners are already in dire financial straits, and yet we face additional fears of suspension on top of unreasonable fines when we’re caught selling one can of beer,” said protestors at the rally.

They also called on the government to amend legislation to allow for strong penal measures against customers who ask for ‘doumis’, or illegal hostesses, as well as stricter enforcement on illegal adult entertainment venues masquerading as karaoke establishments to guarantee a safe and healthy karaoke environment.