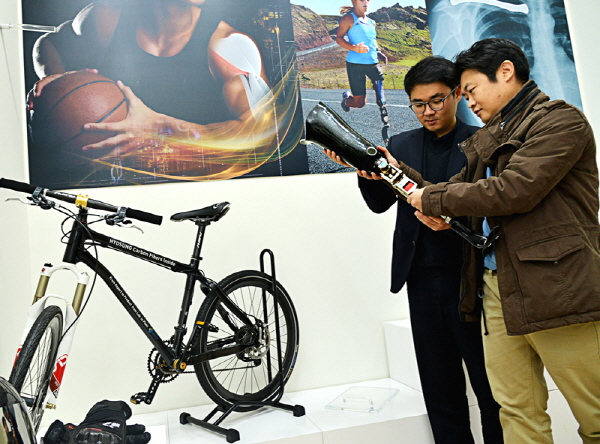 With the government, Hyosung plans to boost the carbon fiber industry to export 10-trillion-won carbon fiber products by 2020. (image: Hyosung)

SEOUL, Nov. 26 (Korea Bizwire) – Hyosung and the government have jointly established a carbon fiber hub in North Jeolla Province. The South Korean company leads the project by investing 1.24 trillion won while the central government and the province support it with an investment of more than 15 billion won.

In the presence of President Park Geun-hye, the business group announced its carbon fiber development plan at the opening ceremony of a Creative Economy Innovation Center in Jeonju city in the province. With the government, it plans to boost the carbon fiber industry to export 10-trillion-won carbon fiber products by 2020. Not only that, it will nurture the agricultural biotechnology and the cultural content sectors in the region.

The world’s best research and development cluster for carbon fiber will be established as the material draws attention as a future fabric which is much stronger and lighter than steel. Even though the carbon fabric industry is very promising, growing 12 percent every year, Japanese companies including Toray currently account for half of the industry. Korean enterprises such as Hyosung, Taekwang, GS Caltex, Samsung General Chemicals and SK Chemicals are now taking their first step in the industry.

As part of the plan, Hyosung will invest more than 1.24 trillion won, or about US$1.1, in its existing factories in the region. Of the total investment, 1.2 trillion won will be injected to its Jeonju factory to expand annual production volume to 14,000 tons from the current 2,000 tons by 2020.

Hyosung Group and the province plan to build the center for start-ups within the factory to nurture 20 small companies in the carbon fiber sector. With the start-ups, it will create a carbon fiber eco-system encompassing from carbon fiber materials to parts to end products.

They will go ahead with a plan to breed the agricultural biotech and the cultural content industries as well. Start-ups will be provided help with experts and special benefits for leasing offices.

“The center should be a stepping stone in the carbon fiber, agricultural biotech and cultural content industries,” said President Park who visited the region for the first time since taking office.