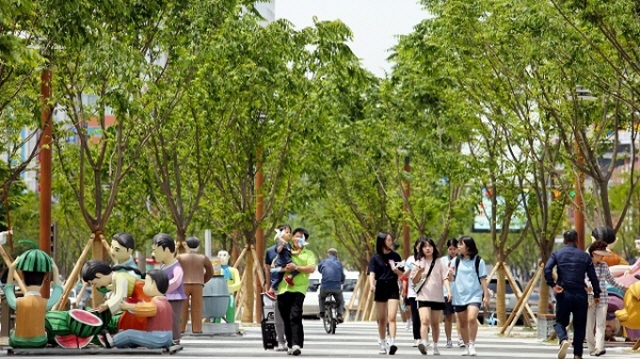 JEONJU, Mar. 19 (Korea Bizwire) — Cities and counties in North Jeolla Province are scrambling to plant more trees this year with the aim to reduce fine dust and offset the urban heat island effect.

According to the National Institute for Forest Science, planting a single tree can result in the absorption of 35.7 grams of fine dust every year, and an urban forest can reduce fine and ultrafine dust in the city by between 25 and 40 percent.

Jeonju currently leads the planting race by starting a 10 million tree project that aims to turn various areas in the city into forests.

It is the project’s objective to turn Jeonju into a ‘Garden City,’ filled with urban forests and gardens.

To achieve this, the city hired a ‘Chief Landscaper,’ the first of its kind among South Korean municipalities, responsible for overseeing the Garden City initiative.

Choi Shin-hyun, Chief Landscaper of Jeonju, received the American Society of Landscape Architects Award for designing the West Seoul Lake Park. He is known as one of South Korea’s best landscape architects.

The city of Iksan has also initiated a plan to plant 5 million trees over the next five years. The city will invest 530 million won (US$468,400) to create an urban forest equivalent to 77 football fields in size.

“Jeonju will soon become a city where there are street trees and gardens in every nook and corner,” said Kim Dae-hyun, head of Jeonju’s 10 million tree project.

“Urban forests will absorb carbon emissions and reduce fine dust and heat island effect, which will help bring the quality of life to another level.”