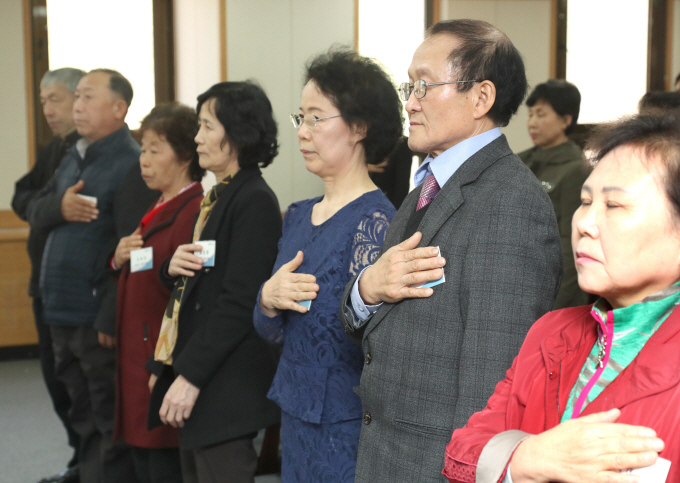 Descendants of Korean independence fighters saluting the national flag during a naturalization ceremony at the Gwacheon Government Complex, south of Seoul on April 9. (image: Yonhap)

The Ministry of Justice said the number of people naturalized here since the enactment of the Nationality Act on Dec. 20, 1948, reached 189,193 as of the end of November.

The nation’s first naturalization occurred on Feb. 8, 1957, when a then Taiwanese citizen who changed his name to Son Il-seung acquired South Korean nationality.

The cumulative number of naturalized South Korean citizens topped 100,000 in January 2011, when an Indian national, who is now serving as a professor at a Busan university, became South Korean.

In celebration of the 70th anniversary of the enactment of the Nationality Act, the ministry highlighted four exemplary naturalized South Koreans.

They include a former Korean-Chinese who became a maritime police officer in Busan, a former Pakistani who received the Export Tower Award over the past three years as a trader of used construction machines, a former Vietnamese who now attends the Air and Correspondence High School while supporting her mother-in-law and three children, and a former Filipino who engages in various volunteer activities while serving as an after-school teacher.