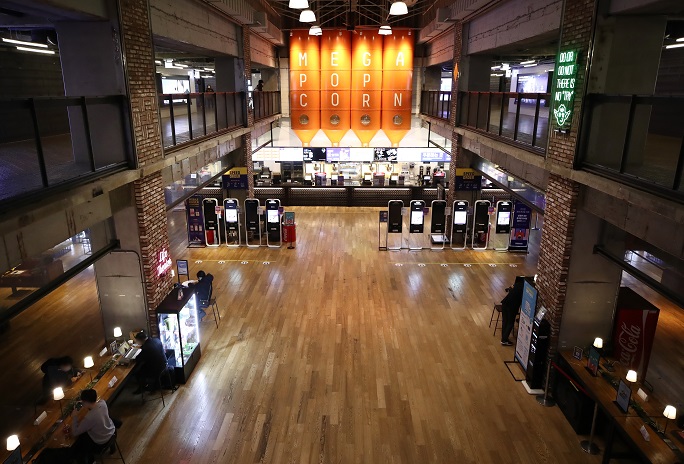 This file photo taken on Feb. 24, 2021, shows a Seoul movie theater that is relatively empty. (Yonhap)

SEOUL, Feb. 26 (Korea Bizwire) – The number of moviegoers in January dropped sharply to a record low for the month due to fallout from the protracted novel coronavirus pandemic, a report showed Friday.

A total of 1.79 million people went to cinemas last month, down 89.4 percent from a year ago, according to the monthly report by the Korean Film Council (KOFIC).

Both figures mark the lowest among all January numbers since KOFIC started to compile box office data in 2004.

The KOFIC report said the nationwide nighttime curfew and strong social distancing affected the film industry in January, which had usually enjoyed a rise in movie fans during the winter break season.

Also, a string of postponements of big-budget blockbusters such as the South Korean sci-fi action film “Seobok” also kept people from going to theaters.

In particular, the number of daily moviegoers dropped to an all-time low of 10,776 on Jan. 11.

But the downbeat trend made a rebound in the last 10 days of the month thanks to the release of two foreign animated films, “Soul” and “Demon Slayer: Kimetsu no Yaiba the Movie: Mugen Train,” on Jan. 20 and Jan. 27, respectively.

In 2020, the South Korean film industry posted a record low of 59.5 million in total attendance, plunging 74 percent from a year ago.