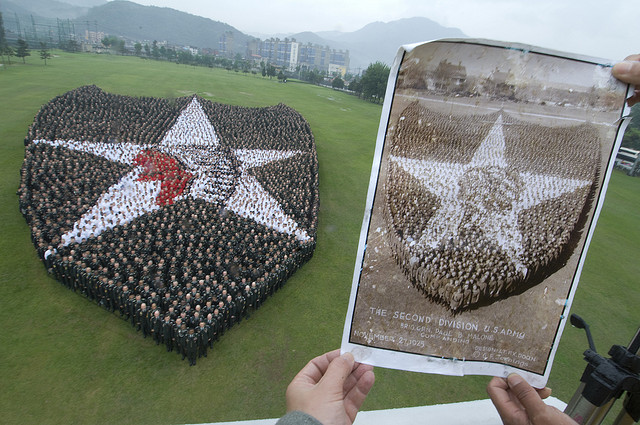 Established in 1917, the 2nd Infantry Division was engaged in the two World Wars and is one of the representing army units of the United States under the Eighth Army of United States Pacific Command. (image: UNC – CFC – USFK/flickr)

SEOUL, June 11 (Korea Bizwire) – On July 1, the 2nd Infantry Division of the US Army, well known as “Indianhead,” will celebrate its 50th anniversary in Korea. Along with the July 4 Independence Day celebration, it plans to mark its half-century presence in Korea with various events and activities.

Established in 1917, the 2nd Infantry Division was engaged in the two World Wars and is one of the representing army units of the United States under the Eighth Army of United States Pacific Command (USPACOM).

Its relationship with Korea goes way back to June 23, 1950, when a part of the division arrived at Busan during the Korean War (1950-1953). During the war, the Indianhead division gained the honor of becoming the first UN force to enter the North Korean capital city of Pyongyang, but later lost one third of its combatants while fighting against Chinese armies.

While the two Koreas were seeking an armistice agreement, the division fought on the fiercest battlegrounds of the Iron Triangle, Pork Hill and Bloody Ridge and came back to the US following the truce in August, 1954.

However, the Cold War brought the Indianhead warriors back to Korea. On June 1, 1965, they returned and began guarding the main attack routes of North Korean forces as a “trip wire”, ensuring the automatic engagement of US forces under a North Korean attack.

Even after the truce, the Indianhead division lost warriors including Captain Arthur Bonifas and First Lieutenant Mark Barrett, who were killed by North Korean border guards during a tree-trimming operation at the Joint Security Area.

The accident brought the Korean Peninsula to the edge of war, but the tension was diffused by a North Korean apology. Since the accident, the two Koreas no longer cross the military demarcation line, even in the JSA. Currently, South Korean and UN soldiers guarding the JSA are now staying at Camp Bonifas.

Although the Indianhead warriors have contributed much to Korea’s national security, they have left formidable scars on Korean society.

In 1992, an Indianhead soldier brutally killed a woman working at a bar with a soda bottle, which ignited Koreans’ voices over to revise the SOFA.

In 2002, two middle school students walking along a national road were run over by an armored vehicle from the division. The accident triggered a wave of anti-American sentiment, with thousands participating in nation-wide candlelight vigils.

The whole 2nd Infantry Division was expected to be relocated to Pyeongtaek, however the plan was revised to leave some artillery units in Dongducheon, which caused protests from residents of the city.