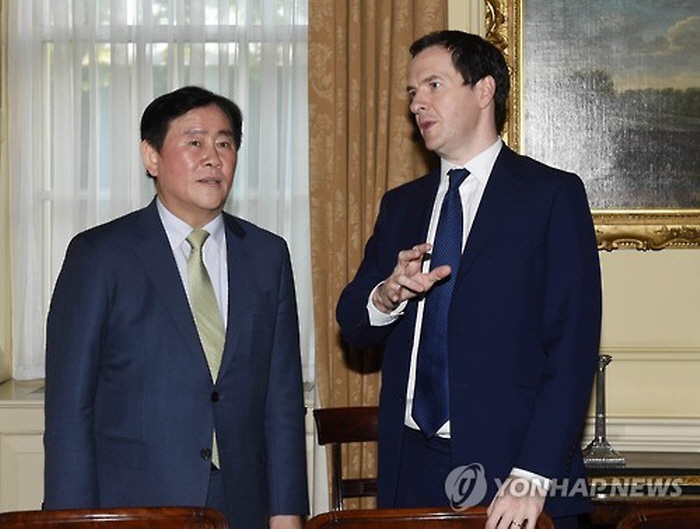 In a meeting in London, Choi Kyung-hwan and his British counterpart, George Osborne, stressed that the two countries have complementary industrial structures that allow for cooperation in a wide range of areas. (image: Yonhap)

In a meeting in London, Choi Kyung-hwan and his British counterpart, George Osborne, stressed that the two countries have complementary industrial structures that allow for cooperation in a wide range of areas.

The two men agreed that South Korea and Britain can forge closer business relations in such areas as the financial sector.

The finance minister and the chancellor of the exchequer also said closer ties are possible as both countries move to expand their roles as leading yuan trading centers.

South Korea and Britain started direct foreign exchange transactions using the Chinese currency as of last year. The move is part of an ongoing effort by Beijing to make the yuan an international currency. It can, moreover, reduce costs for businesses that at present have to settle accounts using the U.S. dollar.’

In addition, Choi and Osborne exchanged views on ways to strengthen transparency in the Asian Infrastructure Investment Bank (AIIB), which they joined as founding members earlier this year. The two trading partners said they will work closely on such matters and procurement of products needed by the bank to engage in development projects.

The finance ministers also said they are committed to following through on agreements reached during the 2013 summit meeting that call for doubling two-way trade by 2020 and expanding ties so South Korean and British companies can jointly make inroads into third markets.

As of last year bilateral trade stood at US$13.23 billion, with Britain being the fourth-largest overseas investor in South Korea.