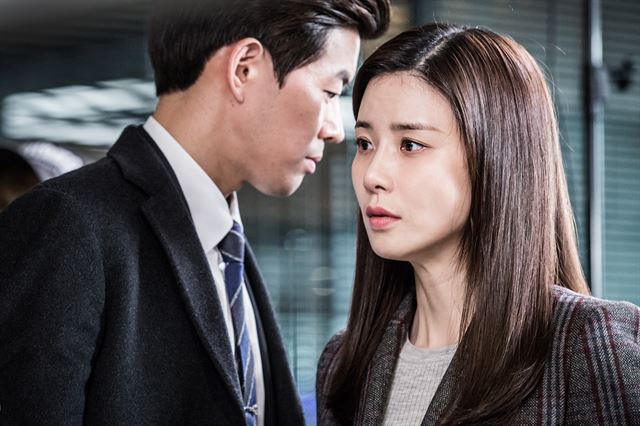 Earlier episodes of “Whisper” were mostly panned by TV critics, many of whom saw the character and plot development as being half baked and at times overdramatic. (image: SBS)

SEOUL, May 18 (Korea Bizwire) — SBS TV’s legal thriller “Whisper” maintained its lead in the Monday-Tuesday late night TV race, while its nearest rival “Rebel: Thief Who Stole the People” ended its run with moderate success, according to data Wednesday.

The rating for Tuesday night’s episode 15 of “Whisper” stood at 16.4 percent nationwide, according to Nielsen Korea.

In “Whisper,” actress Lee Bo-young plays Shin Young-joo, a homicide detective seeking revenge against Lee Dong-joon, a judge played by Lee Sang-yoon, who wrongfully convicts her father of murder. But Shin ends up falling in love with her nemesis, as they work together to fight the corruption by a weapons manufacturing company related to her father’s case.

The final 30th episode of “Rebel,” MBC TV’s period series based on the lore of Joseon-era bandit Hong Gil-dong, came in second with 14.4 percent, followed by “Becky’s Back,” a four-episode miniseries on KBS 2TV, standing at 2.9 percent.

Earlier episodes of “Whisper” were mostly panned by TV critics, many of whom saw the character and plot development as being half baked and at times overdramatic.

But the show later gained momentum by better highlighting the core conflict and as the lead characters’ initially antagonistic relationship evolved into an intimate one.