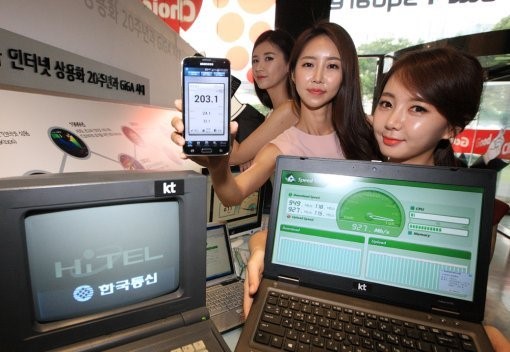 During that time, Korea’s Internet usage rate rose to 82 percent last year from 66 percent in 2003. Especially, the uptake rate among teens to their 30s is close to 99 percent and the Internet created ever-changing trends in shopping, finance and public services.

Now, the Internet service is evolving as the Internet of Things (IoT) connecting all the things without distinction of people and things. IoT enables us to countermeasure more positively to the change of surrounding environment and situation by real-time collection, transmission and analysis of information. The domestic market volume of IoT will grow up to 30 trillion won by 2020, 13 times higher than last year’s 2.3 trillion and IoT will lead the Internet market.

KT named the hyper-connected revolution among things as “GiGA Age” and will increase its competitiveness in the fixed line-wireless integrated network based on its strength in the fixed-line Internet by investing 4.5 trillion won.

At first, KT will provide a Giga-class FTTH Internet service, 10 times faster than the current one during the latter half of this year. Through the ultra-high speed Internet, consumers can enjoy high-quality contents easily at home like high-definition videos, real-time two-way educational classes and the like.

KT also will actively prepare for the “GiGA Age” by providing IPv6 which can be directly interlocked with major overseas networks. KT began providing the latest version of Internet Protocol that can be used to provide IP addresses for smartphones or electronic appliances since June 10.

The service provides 40-GB speed by interlocking with overseas networks bypassing the Korea Internet & Security Agency and an almost unlimited number of IP addresses, compared to other carriers’ IPv4, which provides up to only 4.3 billion Internet addresses.

An official at KT said, “KT began the Internet service in Korea and accompanied all the technical developments. Based on the accumulated technologies and insights, we will lead the GiGA Age by providing a perfect fixed line-wirelessnetwork service and keep the leading position in the telecommunications market.”