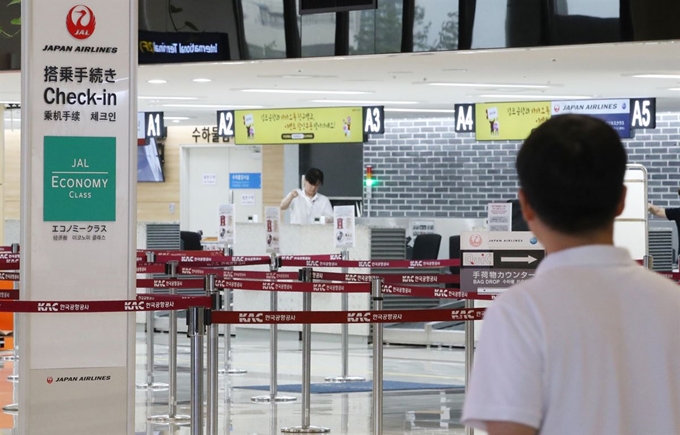 A total of 561,700 South Koreans visited Japan last month, marking a 7.6 percent on-year drop and the lowest monthly figure this year, according to the data by the Japan National Tourism Organization.

The fall is in contrast to the overall growth in the number of foreign tourists visiting Japan.

For the month, the country saw more than 2.99 million inbound travelers, a 5.6 percent rise from a year earlier and an all-time high, the latest data showed.

During the first seven months, the number of South Koreans visiting the neighboring country declined 4.3 percent on-year to 4.42 million, according to the data.

The fall can be attributed to a boycott campaign against trips to Japan, as well as against Japanese products, among South Koreans after Japan curbed exports of key materials to South Korea on July 4 in apparent retaliation over a spat surrounding wartime forced labor.

Earlier this month, Tokyo upped the stakes in the trade dispute by dropping South Korea from its list of trusted trading partners. This move caused bilateral relations to ebb to a new low.

In response to the drop in passenger traffic, South Korean carriers have cut flights or made plans to streamline their routes linking cities of the two countries.