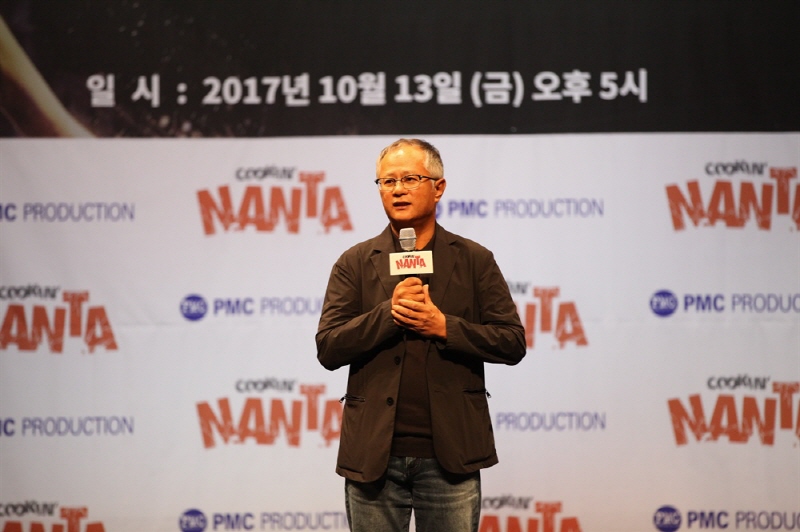 SEOUL, Oct. 19 (Korea Bizwire) — A recent turn of events caught musical producer Song Seung-whan off guard. The creator of “Cookin’ Nanta,” one of the country’s most successful, longest-running theatrical shows, never imagined he would, decades later, face his biggest challenge ever in the least expected area: diplomacy and security.

Last week, PMC Production, which produces the popular non-verbal show, held a celebratory event in Chungjeongno Nanta theater in central Seoul to mark the show’s 20th anniversary. The mood of the event wasn’t all upbeat as the very venue is scheduled to be closed at the end of this year due to lack of audience.

“Figuratively speaking, Nanta came of age. Just like young adults, I believe it is going through growing pains,” Song said at the event, referring to its struggling business and the decision to close the largest of the five theaters dedicated to the production — three in Seoul, one in the southern resort island of Jeju and one in Bangkok, Thailand.

The painful decision came after the company took a wait-and-see approach for several months while the number of Chinese tourists — its biggest clientele — plummeted almost 50 percent.

In March, Beijing ordered the country’s local tour companies to stop selling tour packages to Korea in what is believed to be a retaliatory measure to show its dissatisfaction with Korea’s decision to deploy a U.S. missile defense system known as Terminal High Altitude Area Defense.

As a result, Korea’s tourism and entertainment industries, which heavily depended on Chinese visitors and consumers, were dealt a staggering blow. The total number of Chinese tourists in the January-August period came at 2.87 million, a 48.8 percent drop from 5.6 million in the same eight months of 2016, data from the Korea Tourism Organization (KTO) shows.

When the musical producer unveiled the show in a local theater two decades ago, he had to fill the seats with freebie tickets. It was better than performing in front of an empty auditorium.

“The reaction couldn’t have been more lukewarm. People were like, ‘Can a samulnori-based show be any fun?’” he said, referring to Korean traditional percussion performances and music.

“Ticket sales were dismal. Considering the importance of the interactions between the performers and the theatergoers in making a truly enjoyable, complete show, we needed an audience,” PMC Production’s artistic director Song said of distributing free tickets.

“At that time, I never imagined it would last this long.” 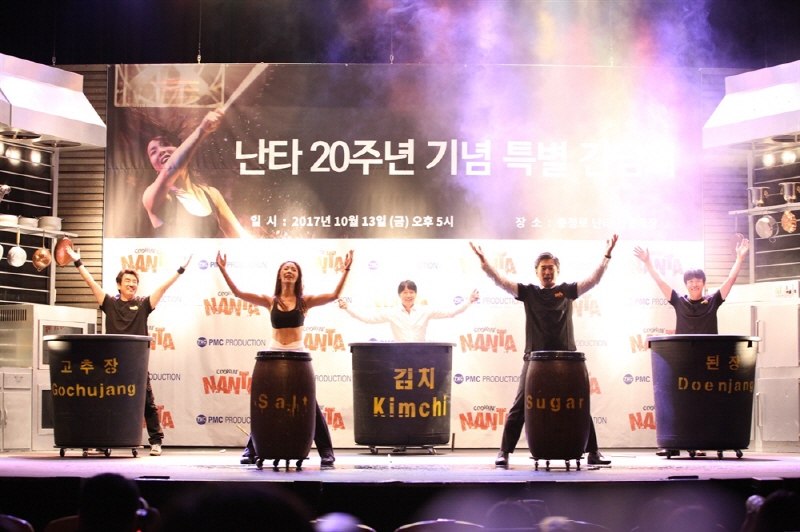 It didn’t take long, however, before the drum-beating, slice-and-dice cooking performance — albeit with no actual cooking involved — received rave reviews. Within 10 days of the opening, Korean theatergoers clamored for tickets to the sold-out show.

The show’s loud banging beats and hyper-energetic performances, Song added, proved popular at a time when the country was hit hard by the Asian Financial Crisis and people wanted their spirits lifted.

In less than two years, the show successfully debuted at the Edinburgh International Festival. In September 2003, it opened at off-Broadway New Victory Theater and the next year at Minetta Lane Theater where it ran for one and a half years, a feat that no original Korean show had ever achieved before.

The kitchen-sink comedy takes its audience behind the scenes of a restaurant where the manager suddenly orders the three chefs, about to start their day, to prepare a wedding banquet by 6 p.m. The power-tripping manager even brings in his nephew — a goofy novice cook — adding more confusion to the already stressful, chaotic kitchen.

While preparing the foods, the performers “strike relentlessly,” or “nanta” in Korean, kitchenware such as tins, plates and chopping boards — with knives, creating loud, rhythmic percussion sounds out of it. Dynamic, frenetic acrobatic performances add fun to the entertainment.

At the event last Friday, the show’s four initial members — now in their late 40s and early 50s — gave a special performance.

Among them, actor Ryu Seung-ryong, who has successfully established himself as a character actor in the country’s film scene, recalled the show’s great popularity among aspiring actors, including himself.

“The Nanta of today is made of our blood, sweat and tears. I can’t think of my life without it.”

Kim Won-hae, another actor who’s been in the show for 10 years, said he felt a mix of feelings.

“I still vividly remember the times when we were constantly revising and fixing the show. We had to go through trial and error to complete Nanta as it is today,” he said. “We came here today to celebrate the anniversary, but sadly we can’t just be gleeful.”

In a separate interview with Yonhap News Agency on Monday, Song said the company was planning to seek a breakthrough by building Nanta-exclusive theaters overseas.

The company recently shut down one in Guangzhou, China, but still successfully runs one in Bangkok, of which occupancy rates for the 73-minute-long show hover at over 90 percent. For the Sept. 22 show, 43 percent of the seats were occupied by, again, Chinese viewers, while 40 percent were Vietnamese, according to Song.

“If overseas tourists decide not to come to Korea, we will go out to find them. Since I created the non-verbal show to target a global audience in the first place, it is only natural for me to explore overseas markets.”

He said the company was considering opening theaters in Thailand’s Pattaya and Hawaii, although nothing concrete has been determined yet.

“If there is one thing that I learned from this, it is that we shouldn’t stop venturing out into a new market. We have to keep moving and exploring.”