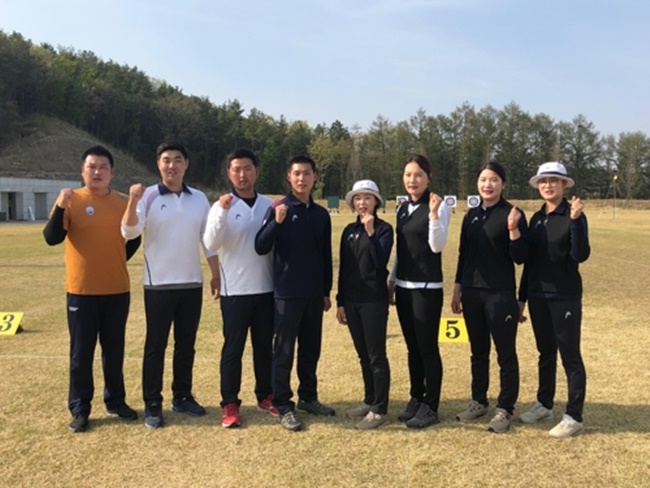 Chang Hye-jin, a double gold medalist at the 2016 Rio de Janeiro Summer Games, and Kim Woo-jin, a member of the gold medal-winning men’s team at the same competition, won the female and male events at the 2018 national team trials on Monday in Jincheon, 90 kilometers south of Seoul.

The top four men and the top four women qualified for the Aug. 18-Sept. 2 Asian Games in Jakarta and Palembang, Indonesia.

Kim is joined by Lee Woo-seok, Oh Jin-hyek and Im Dong-hyun. Lee is a 20-year-old up-and-comer, while Oh, 36, and Im, 31, are seasoned veterans with three Olympic gold medals between them.

On the women’s side, Chang will be teammates with a pair of Asian Games debutantes, Lee Eun-gyeong and Kang Chae-young, as well as Jung Dasomi, who combined with Chang for a team gold medal at the 2014 Asian Games.

While eight archers will travel to Indonesia, only two men and two women will get into the individual tournament, and three each will be in the team event.

Exactly who competes in which event will be determined based on the archers’ performances at three World Cups and at the preliminary rounds at the Asian Games.

Given the depth of archery talent in South Korea, making the national team is often considered as difficult as winning an Olympic or an Asian Games medal.