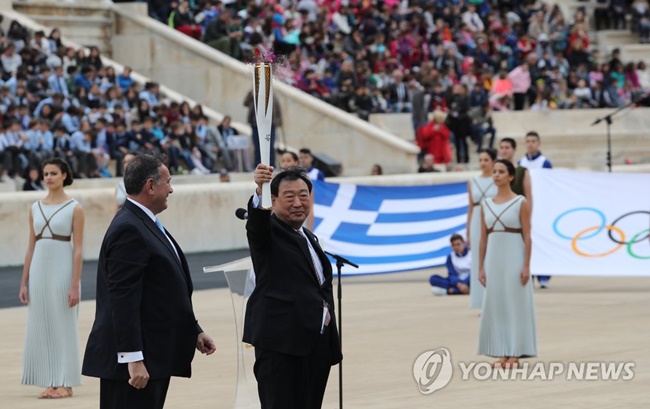 Spyros Capralos, who leads the Hellenic Olympic Committee, passed the flame to Lee Hee-beom, president of the PyeongChang Organizing Committee for the 2018 Olympic & Paralympic Winter Games (POCOG), at the Panathenaic Stadium in Athens. (Image: Yonhap)

Spyros Capralos, who leads the Hellenic Olympic Committee, passed the flame to Lee Hee-beom, president of the PyeongChang Organizing Committee for the 2018 Olympic & Paralympic Winter Games (POCOG), at the Panathenaic Stadium in Athens.

Some thousands of guests, including Greek President Prokopios Pavlopoulos, were in attendance to watch the Olympic flame handover ceremony.

This is the second time that the South Koreans received the Olympic flame from the Greeks. They previously accepted the sacred fire ahead ofthe 1988 Summer Olympic Games in Seoul.

The Olympic flame for the PyeongChang Games was lit Tuesday last week at the Temple of Hera in Olympia, using a backup flame due to rainy weather. Since then, the flame went on an eight-day-long tour with some 505 torchbearers covering 2,129 kilometers of Greek soil before it was transfered to the South Korean delegation.

The 16-member delegation, including sports minister Do Jong-hwan and former Olympic figure skating champion Kim Yu-na, is due to fly with the flame later Tuesday via a chartered flight. To travel more than 8,500 kilometers east, the flame will be kept alive in a safety lantern and will land at Incheon International Airport on Wednesday to mark the 100-day countdown to the PyeongChang Olympic Games.

The torch relay in South Korea will cover 2,018 kilometers by 7,500 runners. The Olympic flame will travel to nine provinces and eight major cities before it arrives at the PyeongChang Olympic Stadium for the opening ceremony on Feb. 9, 2018. South Korean figure skating prospect You Young will be the first torchbearer on South Korean soil.

Tuesday’s handover ceremony, choreographed by Artemis Ignatiou, started with the mixed youth choir of the municipalities of Lavreotiki and Markopoulo singing the Olympic anthem and the national anthems of South Korea and Greece while their flags were hoisted.

After Greek actress Katerina Lehou, who dressed as the high priestess, and other dancers appeared on the stage for their ritual, the flame arrived at the ancient marble stadium where the first modern Olympic Games were staged in 1896.

The 22-year-old Greek skier then carried the flame around the athletics track before he ignited a cauldron in the center of the horseshoe-shaped stadium, which formally ended the Greek leg of the torch relay.

Following a dance performance, the high priestess lit her torch from the cauldron and passed it to Capralos who later handed it to Lee. 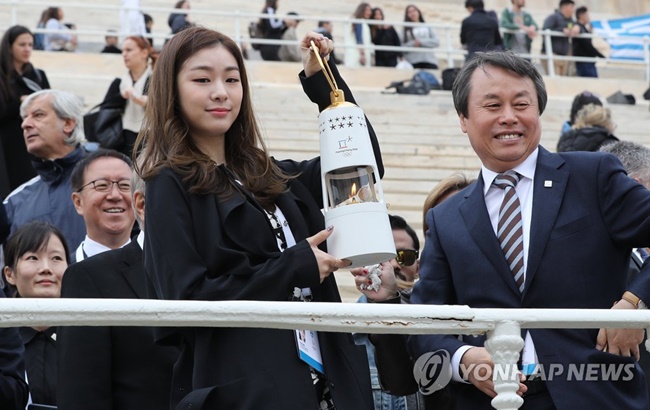 The Olympic flame was handed over tothe South Korean organizers of the PyeongChang Winter Games at a ceremony here Tuesday.(Image: Yonhap)

“We all hope that the torchbearers, who will be carrying the flame in Korea, will pass the message that sports can promote peace and make our world better,” said Capralos. ”I’m sure that with your long tradition, your faith in the values and your love for sports you will stage excellent games next February.”

Lee said the Olympic torch relay will be a “very special journey” throughout the host nation.

“PyeongChang 2018 will inspire younger generations and deliver the Olympic values of respect, friendship and peace to the world,” he said. “We will host the largest and the most culture-oriented Winter OlympicGames ever.”