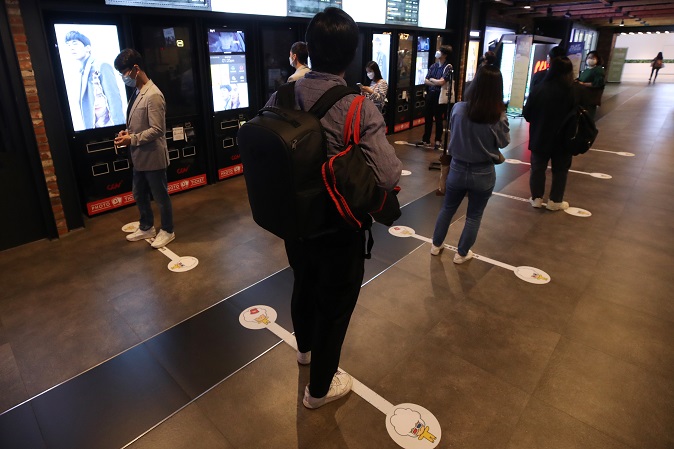 Journalists line up at a distance from one another to get tickets to a movie event at a cinema in Seoul on June 4, 2020. (Yonhap)

SEOUL, June 5 (Korea Bizwire) — Since its first coronavirus case in late January, South Korea has been appraised as one of the successful countries to control the virus spread with its quick and well-organized response and tactics.

The country’s virus curve, after peaking at over 900 daily new infections in late February, had flattened sharply on the back of quick and massive COVID-19 testings and monthslong strict social distancing.

After one month into a loosened quarantine scheme following a slowdown in new cases, however, the country still grapples with sporadic cluster outbreaks in the densely populated metropolitan area, with its hard-won gains against the virus at risk of being pared.

On May 6, the country shifted to an “everyday life quarantine” system, the normalization of public facilities and other business establishments, under the condition people follow basic sanitation measures.

The main feature of the eased quarantine scheme was the reopening of schools, which started on May 20.

When the country opted to make a transition to an everyday life quarantine system, there were high expectations of smoothly returning to daily lives because the country’s new virus cases were surely on a downward trend with zero local infections reported for several days.

Between April 29 and May 5, the daily average of new virus cases was only 7.4, according to the Korea Centers for Disease Control and Prevention (KCDC).

But a month later, the situation turned the other way around and put the country’s everyday life quarantine scheme in jeopardy.

As cluster outbreaks emerged one after another in the densely populated Seoul metropolitan area, home to half of the country’s 50 million population, the country’s daily COVID-19 cases averaged 45.1 between May 27 and June 2, according to the KCDC. 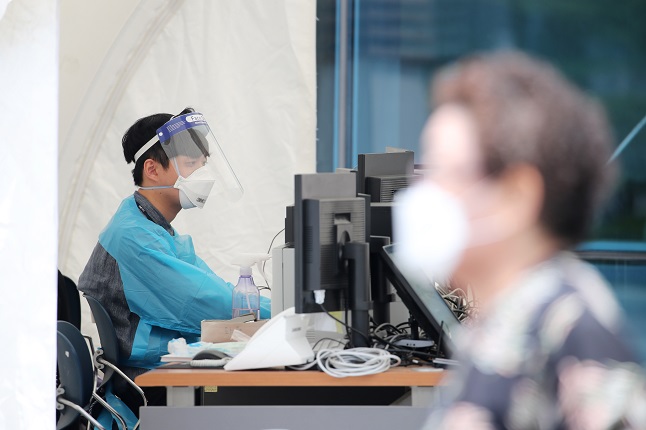 A medical worker looks at a computer monitor at a virus testing clinic at Seoul Medical Center in Seoul on June 4, 2020. (Yonhap)

The first hurdle came from Seoul’s popular nightlife district of Itaewon after a 29-year-old man tested positive for COVID-19 on May 6 following visits to clubs and bars in the neighborhood.

So far, more than 270 cases have been tied to the Itaewon cluster.

While health authorities were focusing on breaking Itaewon-linked transmission chain, a distribution center in Bucheon, west of Seoul, also emerged as a new cluster in late May.

At least 120 cases have been traced to the logistics facility run by e-commerce giant Coupang Inc. after the first patient from the facility was identified on May 23.

Such a cluster outbreak led to South Korea’s sharpest daily rise of COVID-19 infections in nearly two months on May 28 with 79 new cases.

In recent days, church-linked transmissions in Seoul and surrounding areas became a new source of concern for health authorities.

Of the 507 cases identified between May 21 and June 4, 364 were linked with cluster infections, according to the KCDC, with 350 of them coming from the Seoul metropolitan area that includes Gyeonggi Province and the city of Incheon.

The so-called reproduction rate of COVID-19, a gauge that reflects the average of number of people getting infected by a patient, stood at around 1.2 as of Thursday, according to the KCDC. The figure was around 0.5 before the Itaewon outbreak.

“Considering sporadic outbreaks occur constantly, there is a possibility that the community spread of COVID-19 has progressed to a certain level,” said Uhm Joong-shik, a doctor at Gachon University Gil Medical Center.

The resurgence in new virus cases in recent weeks has forced health authorities to reinforce some of the virus prevention guidelines under the everyday life quarantine scheme.

After Itaewon became a hotbed for the spread of COVID-19, Seoul and other municipal governments issued an administrative order banning gatherings at entertainment establishments, which has virtually forced club and bar owners to suspend business. 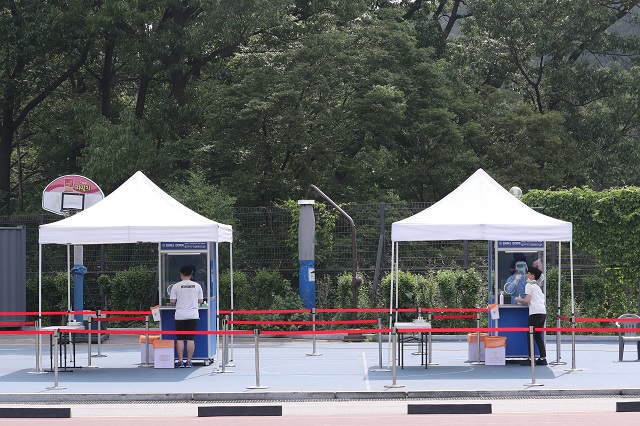 When the logistics center-linked cases emerged, health authorities faced growing calls for a return to strict social distancing campaign that the country enforced between March 22 and May 5.

But instead of rolling back to the tougher quarantine scheme, health authorities last week decided to tighten virus prevention guidelines in the metropolitan area until June 14.

The measures include shutdowns of some public facilities, including museums and libraries.

“The virus has not changed, but our alertness weakened,” said Kim Woo-joo, a professor of infectious medicine at Korea University Guro Hospital in Seoul. “It seems people are failing to comply with social distancing measures.”

Health authorities said they have yet to consider a return to the strict, extensive social distancing campaign given that the country’s quarantine capabilities are sufficient to handle the recent virus situation.

However, a steady rise of untraceable virus infections is forcing health authorities to reconsider their stance.

Of the 507 cases that were confirmed in the last two weeks, 8.9 percent, or 45, were infections with unknown transmission routes. The proportion of such cases was only 4 percent between April 29 and May 13.

“We are worried about seeing a situation that cannot be controlled with late detection of a massive virus transmission in confined environments and loosened social distancing,” said KCDC chief Jeong Eun-kyeong in a recent press briefing.

Some experts said it will be difficult for the country to go back to a strict social strict scheme due to economic reasons, but health authorities need to upgrade virus prevention guidelines.

“We need to set up more detailed quarantine measures and check how they are executed in order to prevent the possible next wave of massive infections in the fall,” said Jung Ki-suck, a doctor at Hallym University Sacred Heart Hospital and former head of the KCDC.