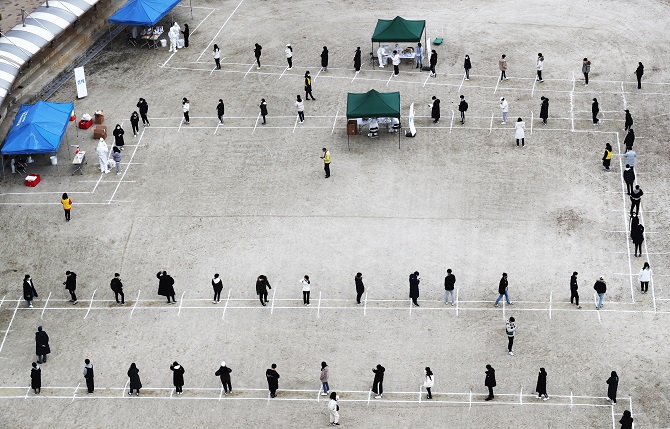 Students and teachers wait in line to receive COVID-19 tests at a high school in Sejong on Nov. 27, 2020, after one student tested positive for COVID-19. (Yonhap)

SEOUL, Nov. 27 (Korea Bizwire) – The daily number of novel coronavirus cases in South Korea exceeded 500 for the second straight day Friday as health authorities grapple with sporadic cluster infections across the country amid the third wave of the pandemic.

The country added 569 more COVID-19 cases, including 525 local infections, raising the total caseload to 32,887, according to the Korea Disease Control and Prevention Agency (KDCA).

It marks the first time the country’s daily virus cases exceeded 500 for the second straight day since the first wave of infections in late February when a massive outbreak swept through Daegu and North Gyeongsang Province.

The new virus cases are expected to stay well above 400 on Saturday, as 378 confirmed cases had been tallied across the country on Friday as of 6 p.m., according to health authorities and local governments.

The number of cases was up 29 from the same time of the previous day. Of them, 267 were reported in the greater Seoul area, with 111 reported in other regions.

The daily caseload has stayed in the triple digits since Nov. 8, with the figure above 300 since Nov. 18, except for Monday.

The 569 new cases announced early Friday is slightly down from 583 cases Thursday when the daily tally spiked to over an eight-month high, but health authorities worry that the third wave of infections is still in progress.

Of the new locally transmitted cases, 64.2 percent, or 337, were identified in the greater Seoul area, home to half of the country’s population.

All major cities and provinces in the country reported additional cases except Daegu.

Among virus clusters, a dance academy in western Seoul added 63 more cases, bringing the total to 129, while a church in southern Seoul reported five additional cases, raising its total to 124.

An additional 10 people tested positive in cases traced to a sauna facility in southern Seoul, raising the total to 58.

The number of cases connected to a traditional Korean drum class in Busan and Ulsan increased by 36 to 89, while the number of cases tied to a group training event in Jinju, South Gyeongsang Province, jumped to 61 after identifying 27 more cases.

A nursing hospital in Gongju, South Chungcheong Province, was traced to 21 more cases, bringing the total to 41.

Of the new infections from overseas, 14 of them were from the United States, followed by Austria with eight and Sweden with seven. 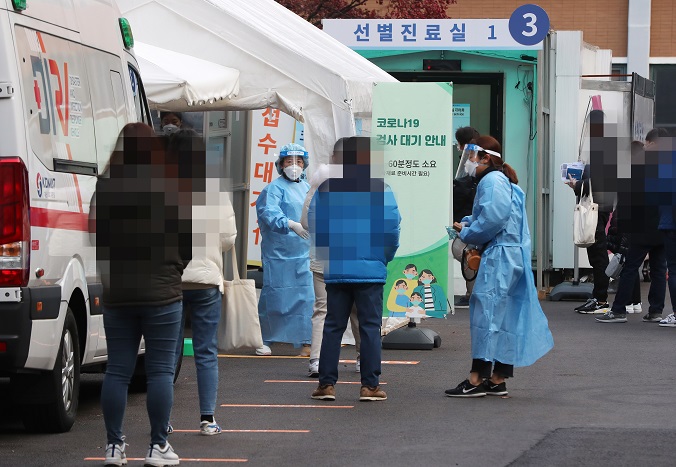 Citizens wait in line to receive COVID-19 tests at a makeshift virus testing clinic in Seoul on Nov. 27, 2020. (Yonhap)

Health authorities have been trying to curb another wave of virus infections before a nationwide college exam next week.

The authorities raised the social distancing level by one notch to Level 2, the third highest in the country’s five-tier system, in the Seoul metropolitan area and began to apply enhanced measures starting Tuesday.

Other municipalities also have been enforcing tougher distancing rules depending on their virus situation. Level 1.5 distancing is currently in place in Gangwon Province and the country’s southwestern Jeolla region.

But since the country’s virus infections show no signs of letup, health authorities said they are discussing with municipal officials options of enforcing further toughened social distancing rules and that they can come up with a conclusion on Sunday.

Health authorities said that the upward trend of COVID-19 cases is likely to continue for a while, as they expect the effects of tightened social distancing measures in major regions to appear starting next week.

Despite the growing virus concerns, the authorities warned against a hasty decision on raising the social distancing level without proper assessment of the situation.

They earlier said it may be too early to raise social distancing measures in the greater Seoul area, now a hotbed of the virus outbreak, to the second-highest level.

Level 2.5 curbs can be enforced if the country’s daily average number of local infections exceeds 400 in a one-week period.

The daily average figure of domestic infections in the past seven days stood at 382.4.

“If we rush to elevate the social distancing level, there could be side effects,” said Sohn Young-rae, a senior health official. “Compulsory measures in the end ask for sacrifices from others in our society.”

Sohn added about 910,000 business facilities in the capital region are currently affected by Level 2 measures and if that regulation is expanded nationwide, more than 2 million facilities will come under the influence of tightened antivirus curbs.

The country reported one additional death from COVID-19, raising the total to 516. The fatality rate was 1.57 percent.

Health authorities said 100 hospital beds are available to accommodate virus patients in serious condition at this moment, but if the current virus situation persists for the next two weeks, the number of hospital beds allocated for critically ill COVID-19 patients may be insufficient.

The total number of people released from quarantine after making full recoveries stood at 27,103, up 153 from the previous day, with 5,268 people isolated for COVID-19 treatment, up 415 from a day ago.

The country has conducted virus tests on 3,009,577 people since Jan. 3. The virus was first detected in the country on Jan. 20.

On Thursday alone, the country performed 21,531 tests, with the positivity rate reaching 2.64 percent, down from 2.68 percent a day earlier.