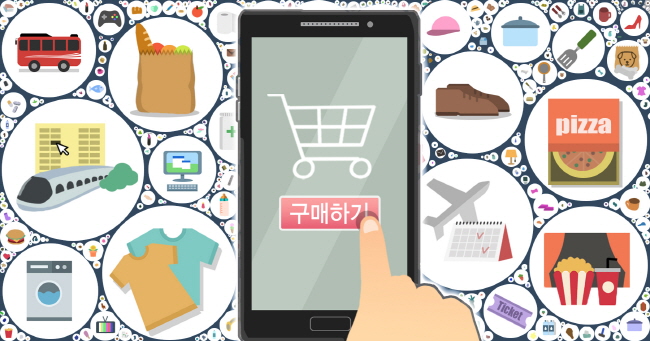 The COVID-19 outbreak has forced many South Koreans to avoid non-essential outings and purchase food and other daily necessities online. (Yonhap)

SEOUL, Nov. 12 (Korea Bizwire) — Online credit card spending in South Korea spiked more than 35 percent in September as consumers avoided going out due to the spread of the novel coronavirus, data showed Thursday.

Online and telemarketing credit card purchases came to 10.29 trillion won (US$9.2 billion) in September, up 35.1 percent from a year earlier, according to the data from the Bank of Korea.

It marks the first time for the monthly tally to surpass the 10 trillion won mark since December 2009 when the central bank began tracking related data.

The on-year increase was also the largest since February 2017 when the figure amounted to 39.3 percent.

In contrast, credit card purchases at department stores and other retailers stood at 7.13 trillion won in September, slightly down from 7.19 trillion won a year earlier.

In particular, credit card purchases at duty-free shops plunged 84.4 percent on-year to 3.13 billion won due to travel restrictions caused by the pandemic.

The COVID-19 outbreak has forced many South Koreans to avoid non-essential outings and purchase food and other daily necessities online. In September, online shopping rocketed 30.7 percent on-year to a new high of 14.72 trillion won.

The new coronavirus has infected 27,799 people in the country since its first case was confirmed in late January, with the death toll reaching 487.