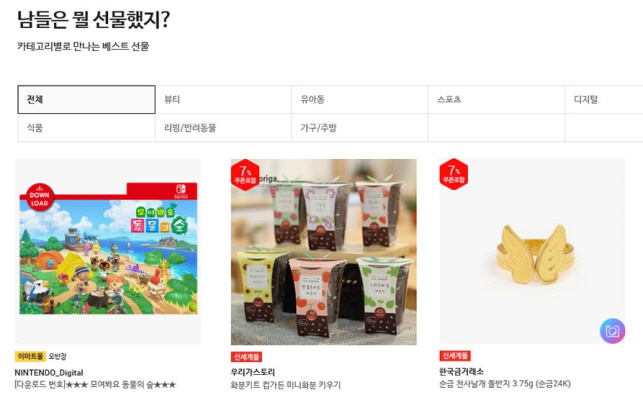 The proportion of home entertainment goods has risen sharply given that more people are choosing to spend time at home. (image: SSG.Com)

SSG.Com, the online shopping unit of retail conglomerate Shinsegae, reported that sales of online gift services in March and April were 43.2 percent and 50 percent higher, respectively, than last year.

Among customers, 70 percent were millennials in their 20s and 30s.

The proportion of home entertainment goods has risen sharply given that more people are choosing to spend time at home.

The most popular product at SSG.Com’s gift service department is the digital code for Nintendo’s Animal Crossing: New Horizons.

While the hard copy of the game is very hard to find, the digital code allows users to download the game onto their gaming device.

“With the increasing number of people staying at home, demand for gifting games to others is increasing, either to play the game alone or together at home,” SSG.Com said.

The cancellation of various sale promotions is prompting more customers to offer home appliances as gifts.

Among them, stylers were the most popular choice, followed by large electronic appliances including televisions, refrigerators, washing machines, and dishwashers.