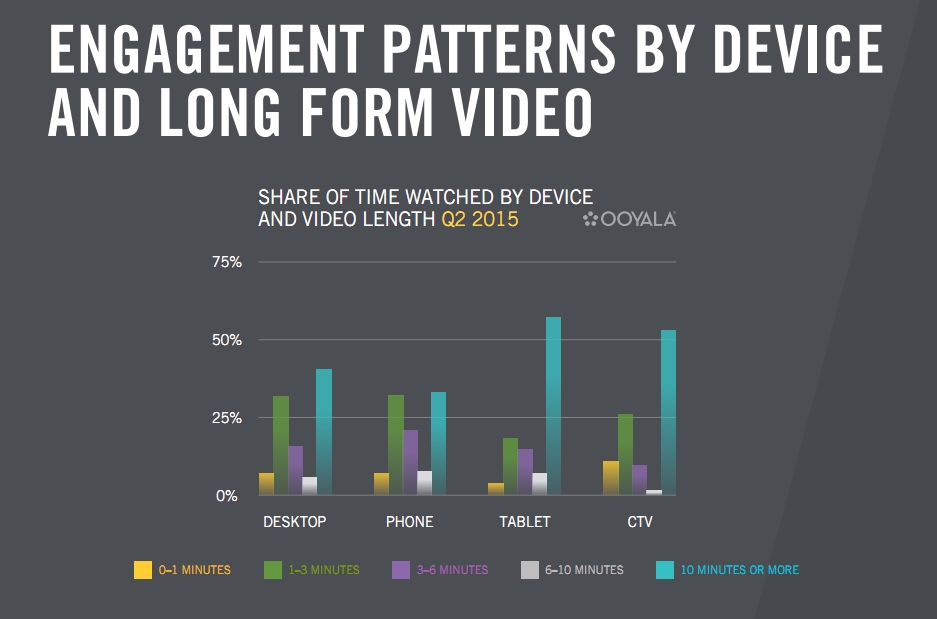 Ooyala’s Global Video Index reflects the anonymized online video metrics of the vast majority of Ooyala’s 500+ customers, whose collective audience of hundreds of millions of viewers spans nearly every country in the world. (image: Ooyala)

SANTA CLARA, CA,  Sept. 16 (Korea Bizwire) – Ooyala, a Telstra subsidiary and a leading innovator in premium video publishing, analytics and monetization, released its Q2 2015 Global Video Index, revealing 49 percent of all ad impressions for publishers were on mobile devices during the quarter, an 11 percent increase from Q1 2015. Further, the report shows 44 percent of all online viewing is now on mobile devices. Together, the trends suggest advertisers are shifting ad dollars to match the influx of mobile viewing and to serve a new generation of TV viewers more comfortable watching content on mobile devices.

Mobile Viewing Continues To Climb
Since Q2 2012, mobile viewing has grown at an annual compound growth rate of 111 percent, peaking at 44 percent of all online viewing in Q2 2015. This growth represents a stunning 844 percent climb since 2012. This is the first quarter mobile viewing hasn’t increased at a double-digit rate. Signs point to double digit year over year growth, however. ZenithOptimedia, a global media services network, expects global online viewing to grow by 23 percent in 2015, and another 20 percent in 2016, and attributes the majority of growth to mobile viewing as smartphones and tablets penetrate global markets.

“It’s all about mobile. From the array of devices on which we watch TV to the way the industry has begun to treat ad inventories, all signs point to mobile as the key to a bigger, better TV business,” said Principal Analyst Jim O’Neill of Ooyala. “This quarter’s growth of broadband subscribers and the corresponding loss of pay-TV subscribers, paired with the increase of digital ad spend by brands and agencies is the evidence that business models, budgets and strategies from broadcasters to advertisers are changing dramatically to align with viewer behavior.”

About Ooyala’s Global Video Index
This report reflects the anonymized online video metrics of the vast majority of Ooyala’s 500+ customers, whose collective audience of hundreds of millions of viewers spans nearly every country in the world. Ooyala captures 3.5 billion analytics events each day. We ingested and transcoded over 100 million minutes of video in 2014. That content was delivered to over 220 million unique users around the world. And those viewers played over 10 billion streams comprising almost 30 billion hours of video. We managed inventory for 30 billion video ad impressions, and delivered over 11 billion ads in 2014.

Headquartered in Silicon Valley, Ooyala has offices in New York, London, Stockholm, Sydney, Tokyo, Singapore, Cologne and Guadalajara, and sales operations in dozens of other countries across the globe. For more information, visit www.ooyala.com.