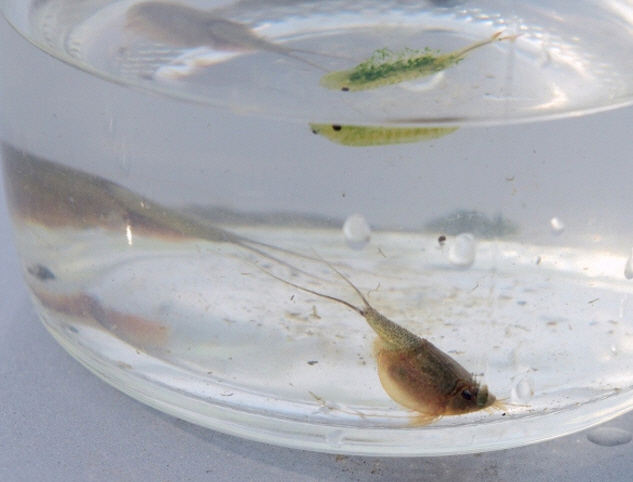 After a colony of longtail tadpole shrimp was found in Sancheong, Gyeongsamnam-do in 2004, they have been spotted in large numbers in towns known for organic farming and clean environment, and on June 23, they were also newly discovered in Hongseong, Chungcheongnam-do.

Kim Seung-ho, who has been organically farming rice in Hongseong County over the last 20 years, said that he and his wife started to spot the shrimp near their rice field last year.

He believes that the shrimp, which are considered a living fossil, are quickly multiplying in the county due to the clean rice fields from organic farming.

Oh Dae-hwan, who officially spotted the living fossils for the first time in Korea, said that he first saw Longtail tadpole shrimp in the late 1980s.

At the time, nobody knew about the rather unpleasant looking creatures, and an agricultural support center tried to eradicate the shrimp near his farm.

However, the shrimp came back to his farm in 2004 and have remained ever-present to this day.