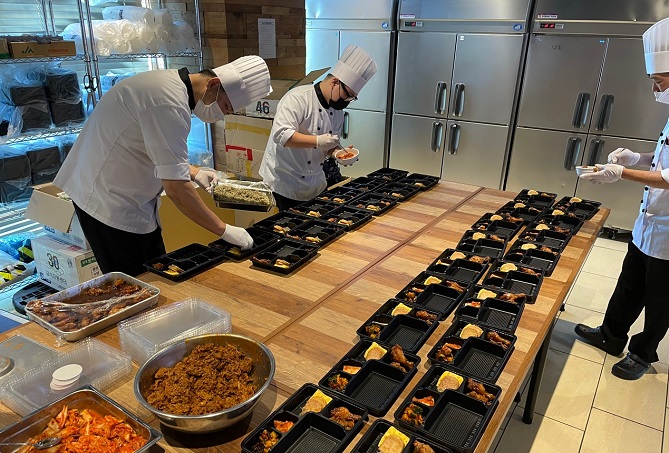 Chefs for the Korean Sport & Olympic Committee prepare boxed meals for South Korean athletes at the Tokyo Olympics at a kitchen inside Henn na Hotel in Urayasu, Japan, on July 20, 2021. (Yonhap)

URAYASU, Japan, July 20 (Korea Bizwire) — South Korean athletes competing at the Tokyo Olympics will be getting a taste of home during their stay in Japan, thanks to a makeshift kitchen built in a hotel near their living quarters.

The Korean Sport & Olympic Committee (KSOC) has set up its meal service center at Henn na Hotel in Urayasu, a city in Chiba Prefecture, east of Tokyo, about a 20-minute drive from the athletes’ village.

Because the kitchen at the 100-room hotel was too small to prepare food for the delegation during two-plus weeks of competition, the KSOC installed three containers in the parking lot, where chefs make boxed meals for delivery to athletes three times a day.

South Korea is serving the athletes on its own, out of concerns about food from Fukushima, a Japanese region exposed to high levels of radiation following a tsunami-triggered meltdown at a nuclear power plant in March 2011.

Japan has balked at South Korea’s decision to pull out of the Olympic dining program and serve its own food, but doing so at the Olympics is hardly new for South Korea.

The national Olympic body has been serving Korean meals to Olympic athletes since the 2008 Beijing Summer Games.

“The primary objective for us is to provide quality meals for our athletes,” said Jeong Nyeon-goo, head of operations at the national training center who has been put in charge of food services during the Tokyo Games.

“We want to serve them safe food while also preventing the spread of COVID-19,” Jeong added. 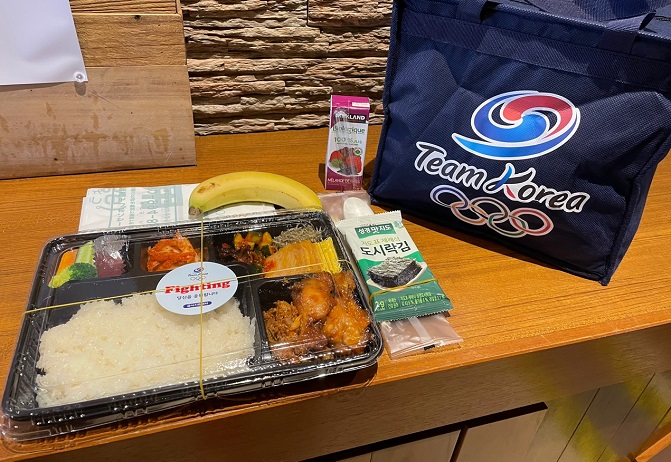 This photo shows a boxed lunch prepared at a kitchen inside Henn na Hotel in Urayasu, Japan, for South Korean athletes at the Tokyo Olympics on July 20, 2021. (Yonhap)

The KSOC dispatched a team consisting of a nutritionist, a food inspector and 14 chefs. Eight staffers from the KSOC and four contract workers are on hand overseeing administration, booking, delivery and quarantine.

The whole staff will spend their entire Olympic stay at the hotel, so as not to risk COVID-19 infection amid the raging pandemic in Japan.

“If anyone here is infected, we’ll have to shut down the hotel and will no longer be able to make meals for our athletes,” Jeong said. “We all feel a strong sense of responsibility here. We want to be able to serve Korean food for the duration of the Olympics.”

The Korean staples of rice and soup will be in heavy rotation. For Tuesday’s breakfast, athletes also got bulgogi (grilled marinated beef) and kimchi, along with other side dishes.

Boiled chicken legs, rolled omelette and spicy stir-fried pork were in the box for lunch.

The KSOC brought sauces and fermented side dishes from South Korea. For fresh vegetables, it is buying local ingredients produced from areas other than Fukushima and eight prefectures around it.

For meat, the KSOC is only serving products from New Zealand and Australia.

One thought on “(Olympics) Out of Makeshift Kitchen, S. Korea Bringing Taste of Home to Athletes”