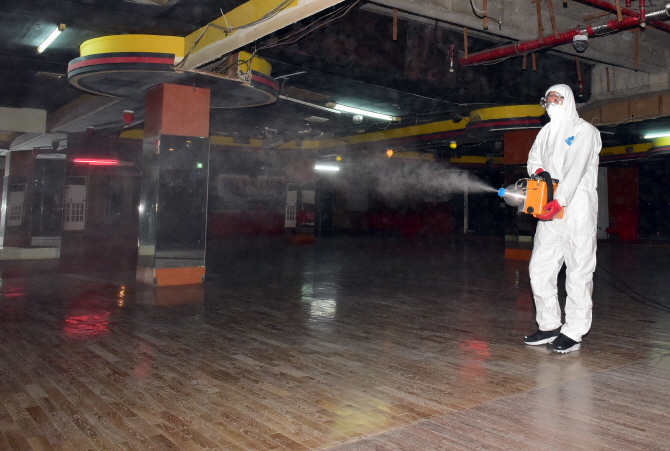 This photo, provided by the office of the Busanjin Ward in the southeastern city of Busan on March 19, 2020, shows a quarantine official disinfecting an alcohol-free dance club over the new coronavirus.

SEOUL, March 20 (Korea Bizwire) — More than one-third of nightclubs and dance spots that do not serve alcohol in Seoul are still in operation, risking cluster transmissions of the new coronavirus, the city government said Friday.

A total of 58 alcohol-free dance venues, dubbed “colatheques” here, and nightclubs are operating in the capital, the Seoul Metropolitan Government said after the first round of its crackdown on 154 establishments.

Customer numbers at the clubs have declined an average of 80 percent, it added.

“The city government will require club officials to draw up a list of customers and keep it for two months,” Na Baeg-ju, civil health bureau director of the municipal government, said at a press briefing.

As of Friday morning, the total number of virus cases in Seoul was at least 300, with 92 cases being tied to a call center in Guro Ward in the city’s southwest.

South Korea has reported 8,652 confirmed coronavirus cases since the first one on Jan. 20. The pace of new daily infections has slowed in recent days, but concerns about small-scale group infections and imported cases are mounting.

The city government has warned that it could take stronger measures against Protestant churches if they stick to mass offline services despite the call for restraint.

The municipal government has advised churches to refrain from holding weekend religious services and to replace them with online ones due to concerns about mass infections.

“If churches do not follow the guidelines, the city government cannot help issuing an administrative order that bans gathering,” said Yoo Yeon-sik, a senior official dealing with cultural affairs.

The official said it will file a compensation suit against churches for costs including virus tests and quarantines if patients are confirmed to be infected due to religious services.