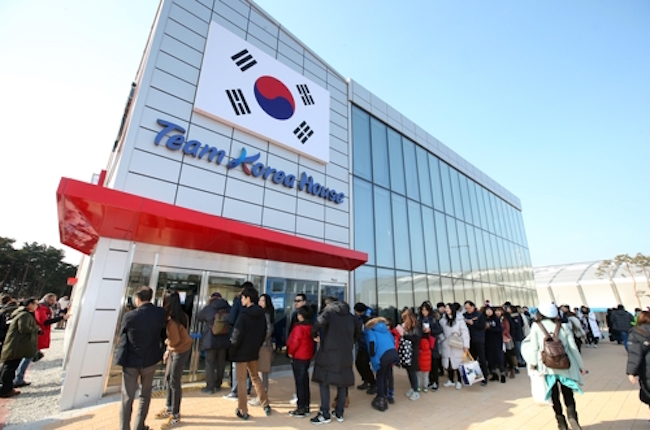 The Korea Tourism Organization (KTO) and the Korean Sport & Olympic Committee jointly operated Team Korea House at the Olympic Park in Gangeung on the east coast, a sub-host city of the games that opened Feb. 9 and closed Sunday.

The state tourism promotion agency said the visitor tally was achieved during a 16-day period, The KTO, however, didn’t disclose the exact number.

The three-story center consists of three main areas divided up into three floors. On the ground floor, visitors were able to learn about the host country, and areas for K-pop performances and traditional dance shows were also set up. On the second and third floors, athletes, journalists and visitors could relax and enjoy free beverages in lounges outfitted with cushy sofas.

According to the KTO, the publicity center for South Korea drew great interest from Olympic officials and foreign journalists.

International Olympic Committee (IOC) President Thomas Bach and other IOC officials toured the center four days after the opening of the quadrennial sporting event. Clad in traditional Korean clothing, or “hanbok,” journalists with such US TV networks as NBC and CNBC also reported on South Korea’s culture and tourism.

Team Korea house, which has been temporarily put on ice with the closing of the Winter Games, will be reopened during the March 9-18 PyeongChang Paralympics, it added.