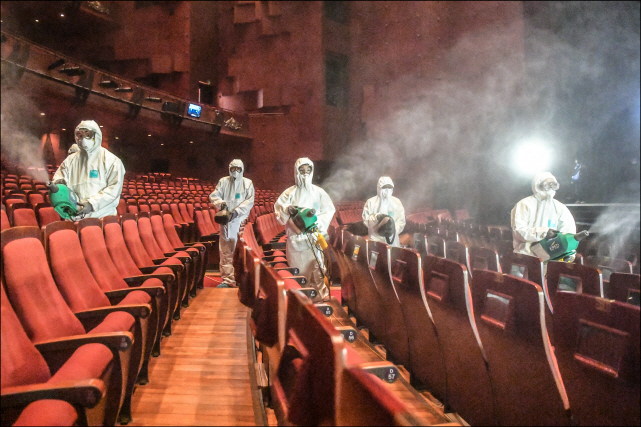 Officials disinfect a concert hall at Sejong Center for the Performing Arts in this photo taken on Jan. 30, 2020, and provided by the center.

SEOUL, March 18 (Korea Bizwire) — More than 2,500 performing art shows and exhibitions have been canceled for the first four months of this year, resulting in heavy financial damage to the arts industry, a report showed Wednesday.

According to the report by the private Federation of Artistic & Cultural Organization of Korea, a total of 2,511 concerts, performing art shows and art exhibitions have been called off in the January-April period due to coronavirus outbreaks.

The direct financial damage from the show cancellations is estimated at 52.3 billion won (US$42 million), the report said.

As of Wednesday, the country has reported 8,413 confirmed cases since its first outbreak in the country on Jan. 20.

As the arts industry is reeling from the pandemic, nearly nine out of every 10 South Korean artists have also seen their income tumble for the four-month period, the report indicated.

Nearly 89 percent of the artists the federation polled said their income during the January-April period shrank from the same period the previous year.

The report is based on the federation’s survey of 163 regional associations of artists, conducted from March 9-12.

As the federation released the latest survey result, it also called on the government to provide emergency support funds for artists and their associations to ride out the crisis.