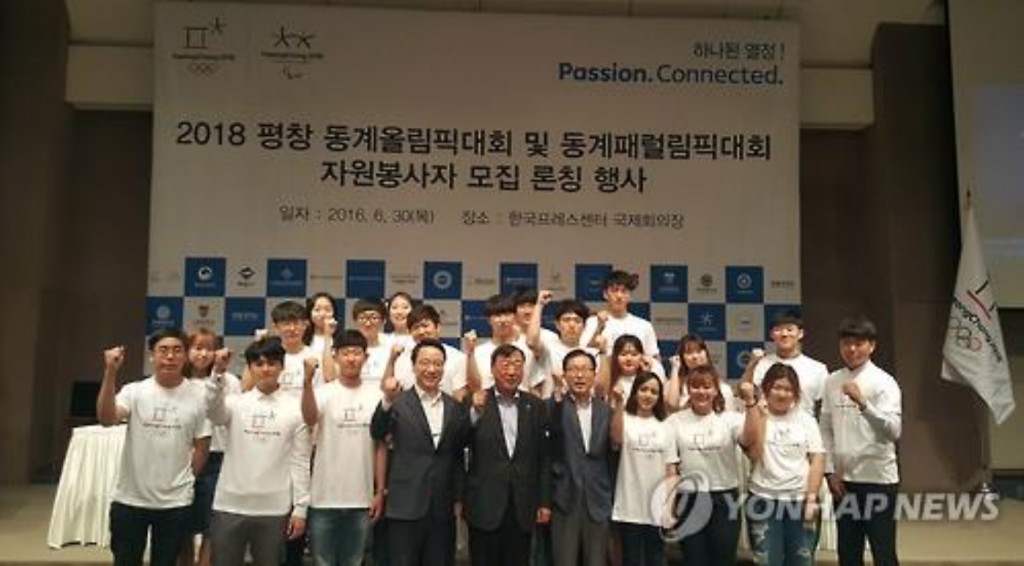 PyeongChang Olympics organizing committee chief Lee Hee-beom (fifth from L) and students from Kangwon National University pose for a photo during the ceremony marking the launching of a volunteer recruitment program in Seoul on June 30, 2016. (image: Yonhap)

The PyeongChang Organizing Committee for the 2018 Olympic and Paralympic Winter Games (POCOG) started their volunteer recruitment campaign from July, hoping to bring on more than 22,000 people from around the world to serve as “the face of the Olympics.” As of Thursday, more than 43,000 people have already submitted their applications, the organizers said.

The POCOG said they will receive applications online through the end of September. Since some 70,000 people have already registered on its website, the organizers expect to see more volunteer applications.

Among the applicants, 1,354 are from PyeongChang County, Jeongseon County and the city of Gangneung. All three Gangwon Province towns will host events at South Korea’s first Winter Games.

Once selected, the POCOG volunteers are obliged to go through field training sessions and other basic classes designed to offer what the committee calls “top-notch” service to the participants in the Olympic Games.

After completing those classes and training sessions, the volunteers will start working in February 2018. Volunteers will be given free uniforms, accommodations, meals, accident insurance and other benefits, the committee said.

“Although there could be difficulties in lodging and commute, people from various regions including Seoul and Gyeonggi Province applied for the volunteer post,” a POCOG official said. “However, we want more applicants from the hosting cities.”
Separate from POCOG’s effort, Gangwon Province is also recruiting volunteers for the Winter Games. However, the municipal government said it only received 1,296 applicants as of Thursday, which is nearly 1,000 less than its planned quota.

“We first recruit residents in Gangwon Province, but some of them have already applied to be POCOG’s volunteers,” an official at Gangwon Volunteer Center said. “We want see people who can offer hospitality with a smile.”