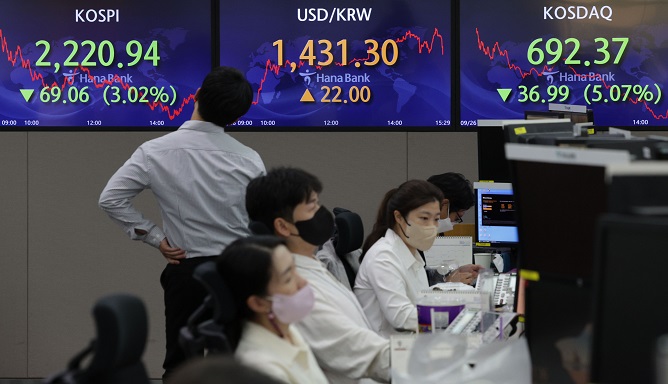 In this file photo, an electronic signboard in the dealing room of Hana Bank in Seoul shows the South Korean currency closed at 1,431.30 won against the U.S. dollar on Sept. 26, 2022, down 22.00 won from the previous session, amid mounting concerns over a global recession. (Yonhap)

Users point out that the spiking exchange rate is depriving them of the incentive to use direct foreign purchase services.

An office worker surnamed Choi recently gave up on purchasing a US$202 bag from the U.S. due to the spiking exchange rate.

As recently as early this year when the won-dollar exchange rate stood at 1,200 won per dollar, around 300,000 won was enough to buy the bag and pay for customs as well as the delivery charges.

Choi turned to resale websites, but the situation there was also similar.

Statistics Korea reported that among all overseas direct purchases made online in the second quarter of this year, purchases made in the U.S. amounted to 512.3 billion won, up 6.4 percent from last year.

The estimate was based on the weekly currency exchange rate, which indicates that considering this year’s spiking exchange rate, direct foreign purchases in the U.S. have in fact shrunk.

Foreign direct purchases in Japan, in contrast, jumped by 31.1 percent from last year, thanks to the weak yen.