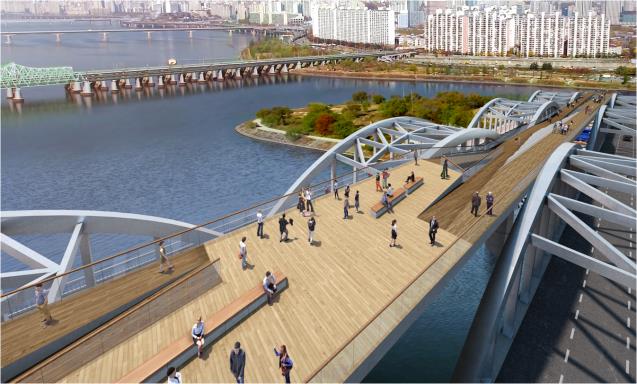 A new footbridge to be built over the Han River by 2021. (image: Seoul Metropolitan Government)

SEOUL, Mar. 20 (Korea Bizwire) — The government of Seoul said Wednesday it will build a new Han River bridge designed solely for pedestrians by 2021.

The new footbridge, to be built alongside the existing Hangang Grand Bridge, will link Seoul’s Noryangjin area with Nodeul Island, an uninhabited artificial island in the Han River that has an ecological park, it said.

Seoul Mayor Park Won-soon said the construction of a new footbridge will be historically meaningful as it will become the first footbridge on the Han River in a century.

The predecessor of the Hangang Grand Bridge, which connects the Noryangjin and Yongsang districts, opened in October 1917 as the first bridge on the Han River that people could also walk across.

The bridge was completely rebuilt in 1954 after being heavily destroyed during the 1950-53 Korean War. In 1981, additional lanes were built to turn it into a twin-arch bridge.

At present, there are 31 bridges over the Han River that connect the capital city’s south and north. But none are exclusively designed for pedestrians.

The Seoul Metropolitan Government said the new footbridge will be 500 meters in length and 10.5 meters in width and cost about 30 billion won (US$26.6 million). It will have a transparent glass floor section, an observatory and an event plaza.

The government said it will decide later whether to build a separate footbridge linking Nodeul Island to the Yongsan district in the north.