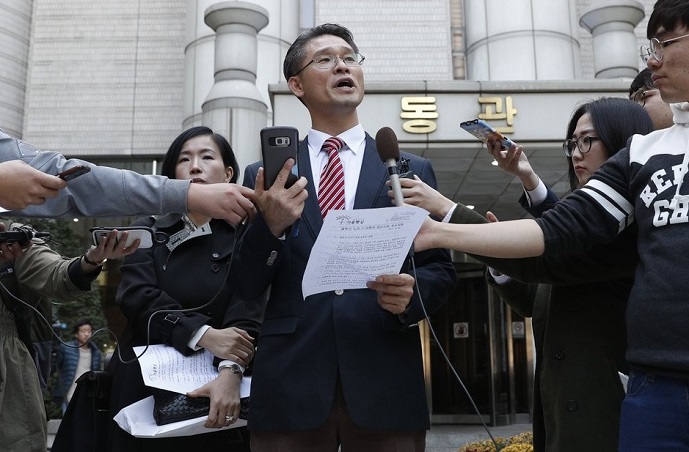 This file photo, taken in 2016, shows lawyer Ko Young-yeel speaking outside of a court in Seoul about a class action over Samsung’s fire-prone Galaxy Note 7 smartphones. (Yonhap)

SEOUL, July 22 (Korea Bizwire) — A Seoul court on Wednesday ruled in favor of Samsung Electronics Co. in a class action suit filed by more than 500 consumers over battery explosions of the tech giant’s ill-fated Galaxy Note 7 smartphones released in 2016.

The Seoul Central District Court said it rejected the indemnity claim by some 520 consumers, who argued they experienced psychological damage due to the explosions of Galaxy Note 7 batteries.

The ruling is in line with a similar verdict issued by the Supreme Court in May, which concluded the plaintiffs’ anxiety and fear felt prior to the recall of Galaxy Note 7 handsets did not amount to mental damage warranting legal compensation.

The Samsung smartphone model, released in August 2016, drew fierce criticism globally due to reports of handsets catching fire while being charged.

In September of the same year, Samsung announced a global recall of Galaxy Note 7 after admitting that the fires were caused by faulty battery cells.

The plaintiffs in the latest class action suit, including lawyer Ko Young-yeel, demanded compensation of 500,000 won (US$418) per person for the psychological damage they suffered from the faulty batteries.

Ko said Galaxy Note 7 owners who didn’t agreed to the company’s recall offers could not receive repairs or other services while some of them had to exchange their phones or get a refund against their will, which are infringements of consumer rights.