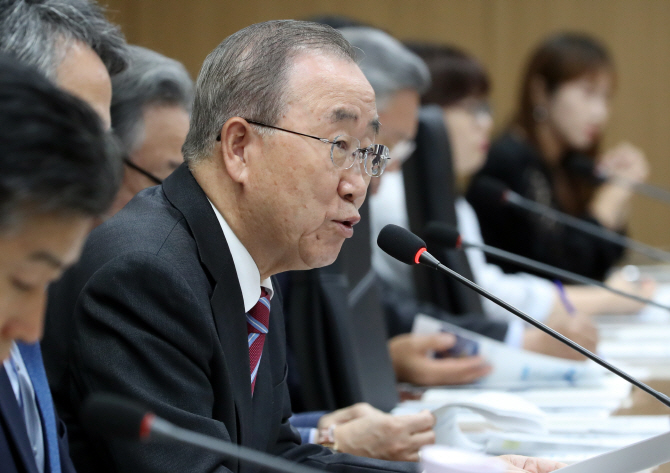 Ban Ki-moon, chair of the National Council on Climate and Air Quality, speaking at a meeting of the presidential climate body at its office in Seoul on Sept. 19, 2019. (Yonhap)

The council said it will announce the result on Monday after fine-tuning details with government agencies.

The meeting focused on emergency steps to be taken between December and March, when the country suffers from seasonably high concentrations of particulate matter in the atmosphere.

The proposals, outlined at the latest forum on Sept. 7-8, included temporarily shutting down 14 of the nation’s 53 coal-fired power plants from December to February and 22 plants in March, while reducing operations of other coal power plants by 20 percent.

In the field of transportation, the policy group proposed limiting the operation of high-emission vehicles, including old diesel cars, during the four-month period and implementing road rationing for vehicles when pollution worsens.

The group also called for the establishment of a 1,000-member public-private inspection corps to monitor major industrial complexes.

It proposed the government apply more stringent emissions standards to some 1,150 large-scale workplaces and spend 200 billion won (US$167 million) per year in aiding the mitigation efforts of smaller businesses.