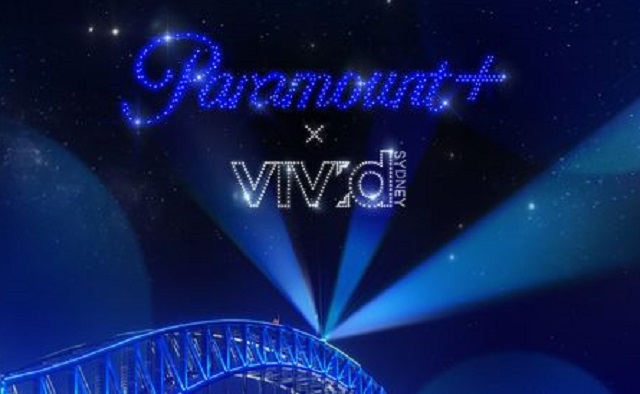 Paramount+ is buzzing with excitement, to be taking to the skies on Sunday, 29 May (AEST) to deliver audiences the Southern Hemisphere’s biggest ever drone show as part of the Vivid Sydney 2022 program.

Now in its 12th year, Vivid Sydney will transform the Harbour City into an illuminating fusion of creativity, innovation, and technology from Friday, 27 May to Saturday, 18 June, with more than 200+ events celebrating the essence of Sydney’s soul including its diversity, beauty, resilience, First Nations culture, and vibrant creative community.

This one-of-a-kind show will encapsulate the Paramount+ tagline of ‘Unique Stories, Iconic Stars, and a Mountain of Entertainment’, through a fleet of 600 drones hovering above the Sydney Harbour, in a playful display, illustrating some of the streaming service’s most iconic stars and scenes.

Not in Sydney? Not a problem! The history-making event will be available for all to enjoy, via live stream across Paramount+ and Vivid Sydney social platforms.

On partnering with Vivid Sydney 2022, Regional Vice President Marketing & Growth at Paramount+, Louise Crompton said: “Partnering with the annual Vivid Sydney 2022 and SKYMAGIC for a spectacular light and sound show like no other, secures Paramount+ a special moment in Aussie history: the biggest drone show in the southern hemisphere. We can’t wait to share with you which iconic characters from our fleet of big shows, will come to life above Sydney Harbour!”

“Paramount+ and SKYMAGIC have wowed audiences across the globe with similar drone shows and I’m looking forward to a blockbuster display at Vivid Sydney 2022,” Mr Ayres said. “Vivid Sydney is an open invitation for Sydneysiders and visitors from Australia and the world to come and experience Sydney at its creative best after dark. The 2022 festival has been two years in the making and is not to be missed.”

“The NSW Government is proud to invest in signature events that capture the world’s attention, drive the NSW visitor economy and build Sydney’s reputation as the major events capital of the Asia Pacific.

Assisting Paramount+ in bringing this record-breaking moment to Australian audiences are SKYMAGIC, who produced Latin America’s largest drone show for the local Paramount+ launch in 2021.

SKYMAGIC’s Co-Founder and COO Hitomi Uematsu said: “We are delighted to have the opportunity to reunite with Paramount to deliver what will be the largest drone show ever deployed in Australia as part of the Vivid Sydney annual light festival. It also sees SKYMAGIC perform for the first time in this amazing country, and we look forward to bringing some joy and making friends along the way.”

Chiew Soon Hooi, Pilot-in-Command commented: “We are really excited to be bringing SKYMAGIC to the skies above Sydney Harbour. We have deployed all over the world, and to have the chance to fly our drone light show offering within such an iconic setting is a real honour. I would like to extend our thanks to The Civil Aviation Safety Authority (CASA) for all of their support to date.”