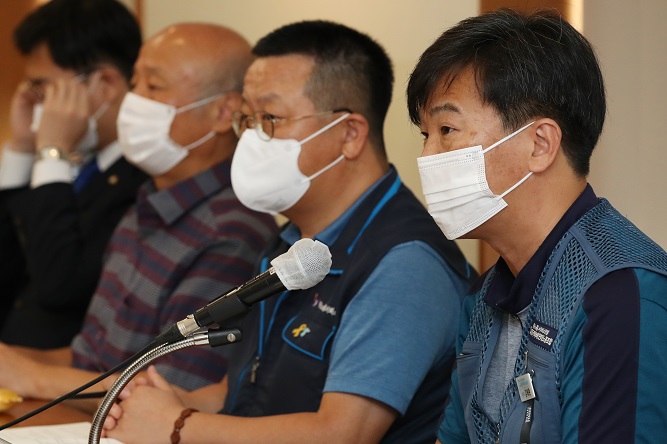 Parcel delivery workers and civic activists speak during a forum on the overwork of courier workers in Seoul on Sept. 10, 2020. (Yonhap)

The Euljiro Committee under the ruling Democratic Party, dedicated to the rights of the weak, and civic groups also released a field report on the delivery industry at a joint forum in Seoul, saying seven parcel delivery workers died from overwork this year, as the coronavirus outbreak triggered a surge in online shopping and parcel volumes.

Committee members and civic activists said a manpower increase is urgently needed for the delivery industry, ahead of the extended Chuseok holiday, the Korean version of Thanksgiving, which runs from Sept. 30 to Oct. 4 this year.

Chuseok is one of the country’s biggest traditional holidays and serves as a chance for family members and relatives to visit their hometowns and exchange gifts.

According to the field report released at the forum, a sample of 821 parcel delivery workers worked an average of 71.3 hours per week, earning an average of 4.58 million won (US$3,870) a month.

Excluding all expenses, such as agency commissions and insurance premiums for vehicles, the workers actually take home around 2.35 million won every month, the report noted.

“Under the Industrial Accident Compensation Insurance Act, overwork-related diseases are recognized when the workweek exceeds 60 hours. It won’t be strange at all if all delivery workers in Korea become ill or die from overwork considering their current workweek,” said a civic activist at the forum.

“Despite such long work hours, the delivery workers are underpaid. In terms of a 70-hour workweek, their minimum monthly wage should be 2.74 million won,” the activist asserted. 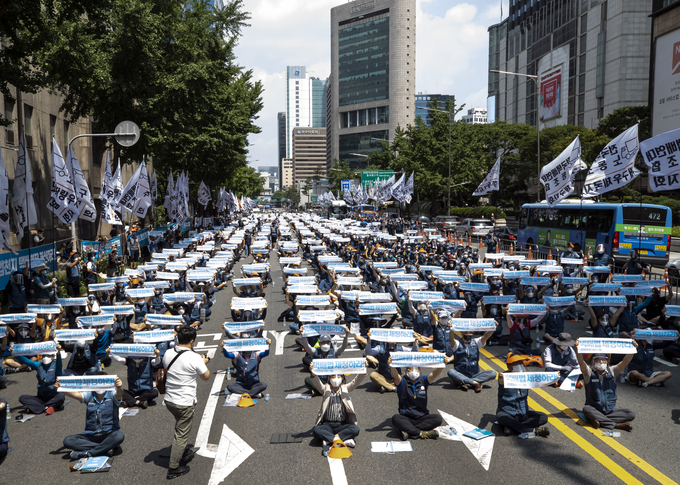 Forum participants also noted that parcel classification accounts for 43 percent of the delivery workers’ daily workload, though they are not paid extra for the sorting work.

Due to excessive time spent on sorting, 25.6 percent of courier workers can hardly eat at all because there they have no break time, the report said, adding only 40 percent of the workers have a 10- to 20-minute lunch break.

“It is estimated that COVID-19 accounts for an increase of some 30 percent in local parcel volumes. The Chuseok holiday is expected to cause an additional 50 percent increase in parcels,” said another activist, stressing an additional input of sorting workers is the only solution to the problem.

In June, Rep. Park Hong-keun of the Democratic Party proposed a new law that calls for separating parcel sorting from delivery.