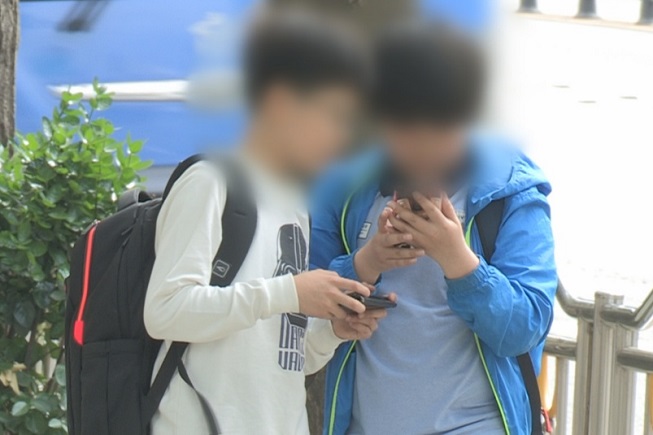 This captured image from Yonhap News TV shows children looking at their smartphones on a street.

SEOUL, March 7 (Korea Bizwire) — The state human rights watchdog has recommended the state telecommunications regulator come up with measures to protect children’s rights from being violated by applications that allow parents to control their children’s mobile activities.

They said private firms are not subject to the state watchdog’s investigation by law and that there also is a limitation in holding the government responsible for the human rights infringements.

The NHRCK, however, concluded that the apps could excessively restrict children’s basic rights, such as the right to privacy and informational self-determination.

It advised the KCC to inspect the apps and take measures to stop them from infringing on children’s rights, if needed, pointing out that the agency put in insufficient efforts as it regarded the matter as a mere conflict between parents and kids.

According to the watchdog’s investigation, the apps not only filtered harmful content but also authorized parents to cap screen time, track down locations, check text messages of their kids and limit news or information related to sports and travel.

It said these functions allow parents to monitor children’s personal lives and limit certain communications activities by them.

“This can excessively restrict children’s fundamental rights, including the right to privacy and freedom of information, mandated under the Constitution and international human rights norms.”

On a developer’s claim that the parental right to educate their kids can justify certain restrictions on their rights, the NHRCK noted that children’s happiness and interest should be prioritized.

One thought on “Parental Control Apps for Smartphones Could Breach Children’s Rights: Watchdog”