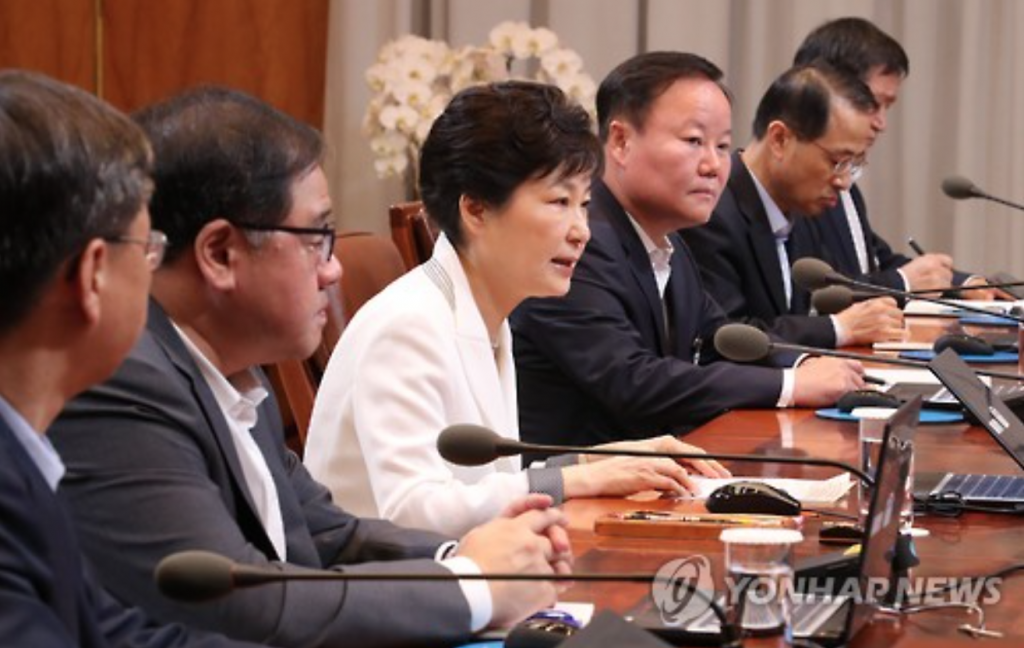 President Park Geun-hye (3rd from L) presides over a meeting of her senior secretaries at the presidential office Cheong Wa Dae on July 11. At the meeting, Park defended a recent Seoul-Washington decision to deploy an advanced U.S. missile defense system in South Korea, saying it won’t be used to target countries other than North Korea, and won’t violate their security interests. (image: Yonhap)

SEOUL, July 14 (Korea Bizwire) – President Park Geun-hye will convene a session of the National Security Council (NSC) on Thursday to discuss follow-up measures to the recent decision by Seoul and Washington to deploy an advanced U.S. antimissile system here, her office said.

On Wednesday, the allies announced their official decision to deploy a Terminal High Altitude Area Defense (THAAD) battery in the southern town of Seongju to better cope with North Korea’s evolving nuclear and missile threats.

The decision triggered a strong protest from local residents who are concerned about potential health risks from a THAAD radar system. Rumors have circulated that the electromagnetic waves emanating from the radar could cause cancer and infertility.

During the NSC session, Park is expected to call on her government to ensure that there won’t be any misunderstandings surrounding the planned deployment of the THAAD battery.

It will be the fourth NSC session this year to be presided over by Park.

THAAD, a core part of America’s multilayered missile defense program, is designed to intercept incoming ballistic missiles at altitudes of 40 to 150 kilometers during the terminal phase of flight after detecting the missiles with a land-based radar system.