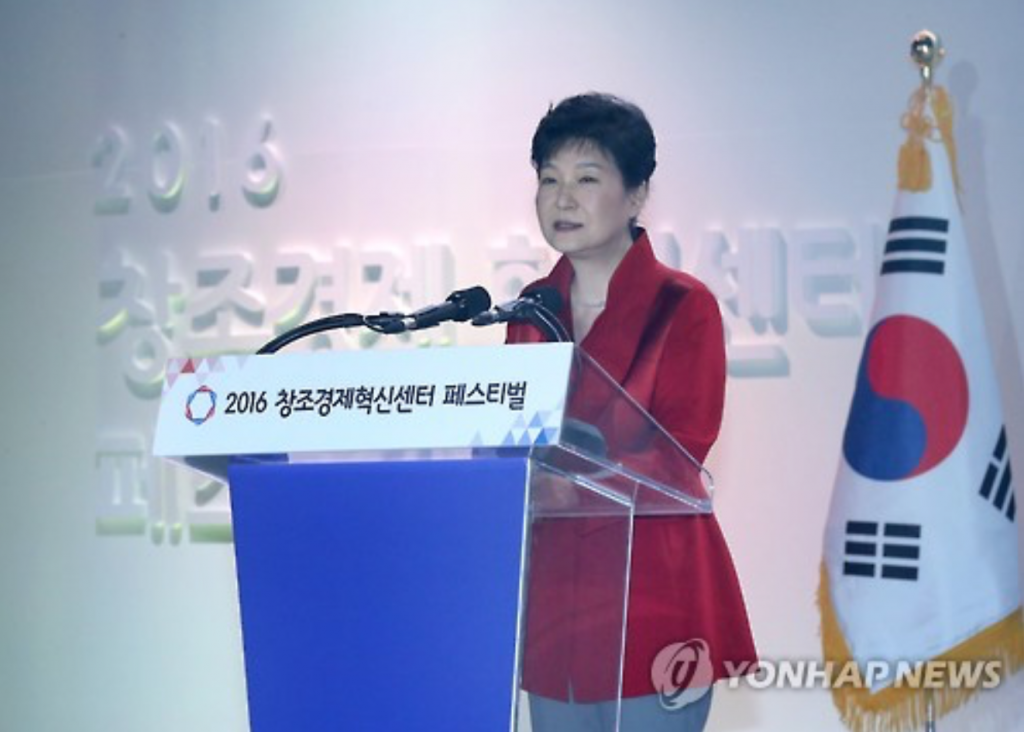 During the opening ceremony, Park cautioned against “defeatist thinking” and called for concerted efforts to make South Korea a leading country in the fast-paced industrial transformation, dubbed the “fourth industrial revolution.” (image: Yonhap)

SEOUL, Aug. 26 (Korea Bizwire) – President Park Geun-hye on Friday visited a festival, designed to showcase the outcome of her “creative economy” drive, urging the public and business sectors to step up cooperation in creating jobs and fresh momentum for economic growth.

The “Creative Economy Innovation Center Festival” at Seoul’s Hanyang University brought together some 1,900 people, including the chiefs of the 17 creative economy innovation centers, aspiring entrepreneurs and top government officials, such as the ministers of education, finance, labor and culture.

The creative economy innovation centers serve as a pivotal platform to advance Park’s much-trumpeted economic drive that aims to boost the economy by creating new business opportunities, industries and jobs through the fusion of cutting-edge technologies, culture and other things.

During the opening ceremony, Park cautioned against “defeatist thinking” and called for concerted efforts to make South Korea a leading country in the fast-paced industrial transformation, dubbed the “fourth industrial revolution.”

“Our vision of becoming a leading nation in the fourth industrial revolution will be impossible if we are haunted by defeatist thinking, but we can definitely make it happen if we trust our potential,” she said, referring to the ongoing changes in cutting-edge technologies, such as big data and the Internet of Things (IoT).

“I hope that with the creative economy innovation centers at the forefront of the efforts, we can expand our passion toward change and innovation, as well as make inroads abroad and create a new future for the Republic of Korea,” she added.

Since September 2014, the central government, in cooperation with provincial authorities and local businesses, has established 17 creative economy innovation centers.

As of Aug. 12, these centers have offered various forms of support to 1,175 startups, and 1,644 small and medium-sized enterprises, and have helped attract investments — totaling 285 billion won ($256 million) — for these local firms. Moreover, the startups, which have been supported by the centers, have created 1,360 new jobs.

Friday’s festival is the second one following the first last year. It features a variety of events, including cultural performances and various exhibitions showcasing the outcome of Park’s creative economy initiative.